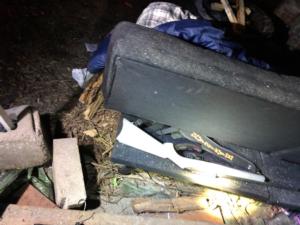 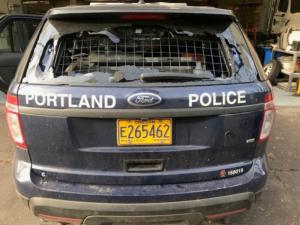 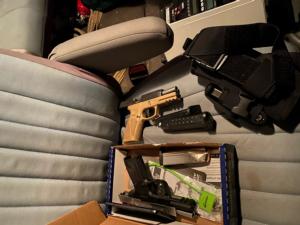 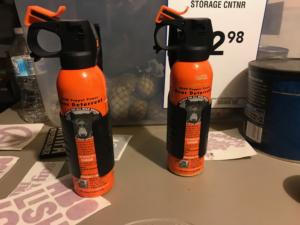 Today, as Portland Police remained on the perimeter of properties in the 4400 Block of North Mississippi Avenue waiting for private contractors to fence the property, people began to gather nearby. People attempted to get inside the perimeter at various locations, despite the presence of uniformed police personnel, police vehicles and police tape. Officers also reminded people not to enter the perimeter. Officers made some arrests and reported using pepper spray in at least one instance.

As police stood on the perimeter, some were subjected to thrown objects such as rocks and paint-filled balloons.

At about 9:42 a.m., contractors finished their work and Portland Police and Multnomah County Sheriff's Office personnel removed the perimeter. Portland Police gave loudspeaker announcements reminding those present not to interfere with fencing and to stay off the private property. Police completely left the area right before 10 a.m. and almost immediately, people removed a portion of the fence and entered the private property.

Portland Police have remained out of the area and are monitoring the situation for the time being. We will provide updates when available.

On Tuesday, December 8, 2020, at approximately 5:00 a.m., members of the Portland Police Bureau (PPB) assisted the Multnomah County Sheriff's Office (MCSO) in returning private property in the 4400 block of North Mississippi Avenue to the property owners. For background information, see an earlier press release by MCSO https://flashalert.net/id/MCSO/140634.

Over the past three months, people have been illegally trespassing on properties on Mississippi Avenue, including in a house and on privately owned lots. Today, police encountered people trespassing at these locations.

A few minutes before 5:00 a.m., officers secured a perimeter by blocking streets and sidewalks surrounding these properties in order to limit access and help ensure the safety of community members as well as police.

PPB and MCSO coordinated their arrival and secured the properties. As police arrived they encountered one person armed with a firearm and safely took that person into custody. Officers were able to contact other people on the properties and safely secure it within a few minutes. PPB recovered firearms on the property.

According to call log data, over the three-month period, from September 1 to November 30, 2020, at least 81 calls for service were placed for issues related to these properties and the immediate area. Calls for service included, but were not limited to: fights, disturbances, shots fired, burglary, thefts, vandalism, noise violations, trespassing, threats (including by armed individuals), and for illegally blocking traffic, sidewalks and access to homes. Throughout this period, PPB officers spoke with many community members about their concerns and the threatening behavior and intimidation they experienced in the neighborhood around these properties.