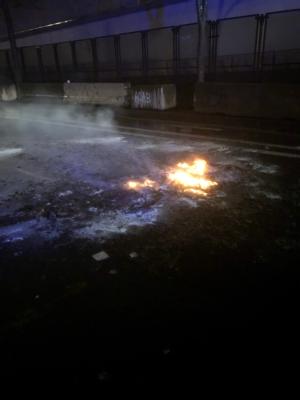 On Thursday, December 31, 2020 at about 7:45p.m., Central Precinct officers became aware of a gathering in the area of Southwest 3rd Avenue and Southwest Main Street. As the crowd grew to an estimated 80-100 people, some individuals in the crowd began to engage in violence. At least two Molotov cocktail-style firebombs were thrown, and large, commercial grade aerial fireworks were launched at the Federal Courthouse and the Justice Center. Some individuals tried to use tools to break into the Justice Center at 1120 Southwest 3rd Avenue, but were not successful.

Portland Police officers citywide had to be pulled from answering emergency calls to respond. Law Enforcement officers from the Federal Protective Services and the Multnomah County Sheriff's office also engaged the crowd and were targeted with dangerous projectiles. Officers were attacked with large rocks, full size bricks, and frozen water bottles. Some officers were targeted by paint balloons that may have been laced with a caustic substance as it caused burning to the skin. Some law enforcement officers suffered injuries, although no Portland Police officers were hurt.

The violence from the crowd prompted a declaration of a riot. The crowd was warned by loudspeaker and social media (@portlandpolice on Twitter), "All persons in the area of Southwest 3rd Avenue around Southwest Main Street are ordered to leave to the south and west immediately. If you do not leave you are subject to arrest, citation, and/or the use of force, including but not limited to impact weapons and tear gas."

Few if any heeded the warning. During the riot, participants started multiple fires. In one, a garbage can was lit ablaze and melted to the pavement. A crosswalk signal was torched, as was various debris piled in the road at Southwest 3rd Avenue and Southwest Main Street (photos). Dangerous objects continued to be thrown at police officers.

The crowd mostly dispersed by 2:00a.m. No CS gas was deployed by PPB during this event, but inert smoke and some impact munitions were used.

Several businesses were damaged. Officers are still compiling the reports of damage. If anyone is a victim of a crime related to this event, they're encouraged to report it online https://www.portlandoregon.gov/police/cor/ and reference case number 20-384961.

Arrests were made. Information on arrests is still being compiled and a list of those arrested will be released at a later time.