Update: Information on Arrests Made Outside of North Precinct 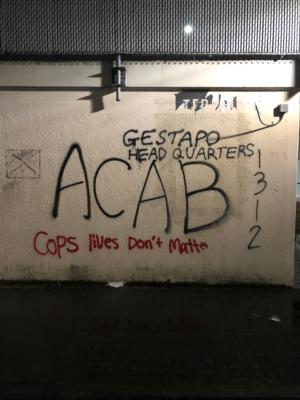 On January 5, 2021, at about 9:08p.m., about 50 people who had gathered at Peninsula Park blocked streets as they moved to the area of North Precinct, near Northeast Martin Luther King Jr., Boulevard and Northeast Killingsworth Street. People were wearing gas masks and carrying shields. The crowd gathered near the precinct and chanted "burn it down" while some people lit fires in two dumpsters.
People in the crowd threw bottles at police and police cars and moved barricades that had been placed in the road near Northeast 6th Avenue and Northeast Killingsworth Street.
Officers from throughout the city responded to try to prevent violence and destruction to this precinct, people who work there, and the surrounding neighborhood. Police gave public address announcements for people to stay off the precinct property.
Many people gathered along Northeast Martin Luther King Jr. Boulevard, blocking traffic between Northeast Emerson Street and Northeast Killingsworth Street. People placed burning material and barricades in the streets, blocking all traffic lanes of Northeast Martin Luther King Jr. Boulevard. People sprayed graffiti on public and private buildings all along the street. As they did, police remained away, near the precinct parking lot, in order to allow people to protest then disperse.
Traffic was light, but steady, throughout this hours-long disruption. Private cars and public transportation could not use Northeast Martin Luther King Jr. Boulevard.
Police staged patrol cars on Northeast Emerson Street, shining lights west to illuminate the crowd for the safety of all present and dissuade them from committing crimes there.
Dozens of people began gathering on the northeast corner of the precinct building and some pulled down a fence there. Officers replaced it only to have people in the crowd remove it again. Police gave repeated direction, including public address announcements, to leave the fencing alone and for the crowd to return to the public sidewalk. Instead people in the crowd threw objects at officers and remained in the parking lot on the north side of the precinct.
Police waited more than fifteen minutes, the crowd continued in the same fashion. Officers moved toward the crowd and most of them fled to the west and then to the north. Officers moved back and allowed the crowd of people to disperse and behave lawfully. Instead the crowd gathered back on the northeast corner of the precinct as before.
Police remained on the precinct property and gave public address announcements directing those trespassing on the property to disperse to the west and north or face the possibility of arrest including the use of force up to and including the use of CS gas. Despite the warnings and direction, dozens of people remained chanting and yelling.
Police remained back on the precinct property for about 30 minutes but the people continued trespassing. Police approached the crowd and most of them fled west then north. Police followed for several blocks to encourage people to continue moving out of the area.
Throughout this disturbance people threw glass bottles and paint at officers. At least one person deployed spikes which damaged police vehicle tires. People destroyed security cameras at the precinct and ripped electrical wires from exterior walls.
Police made some arrests. Arrest details will be released later this morning. Portland Police did not deploy munitions or CS gas.
Portland Fire & Rescue responded to put out the dumpster fires which had been burning in the middle of the street. After they completed that work, police cleared debris from the streets and traffic began moving along Northeast Martin Luther King Jr. Boulevard by 11:42 p.m.
###PPB###