Roll Over Crash Results in Fatality on Powell Blvd 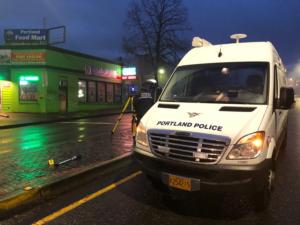 Southeast Powell Boulevard is reopened after the conclusion of the on-scene investigation from this morning's crash. The vehicle, a black Chevrolet Silverado, left the roadway east of Southeast 24th Avenue, hit some poles, destroyed a Tri-Met bus kiosk, rolled over and came to a rest in a business parking lot on the northwest corner of the intersection. The driver was a 73-year-old man from Happy Valley, Oregon. There are indications that a medical event may have contributed to the crash.

A single-vehicle roll-over crash has resulted in the death of a driver.

On Friday, January 8, 2021 at 5:47a.m., Central Precinct officers responded to a crash on Southeast Powell Boulevard and Southeast 24th Avenue. When officers arrived they found a vehicle that had rolled over. Portland Fire and Rescue attempted lifesaving measures, but the driver was determined to be deceased. Preliminary information is that no other vehicles were involved.

The Portland Police Bureau Major Crash Team is on scene. Southeast Powell Boulevard is closed between Southeast 21st Avenue and Southeast 26th Avenue and are expected to be closed for at least two hours during the investigation.

A representative from the Traffic Division will be available for interviews. Media staging is at Southeast 26th Avenue and Southeast Powell Boulevard.