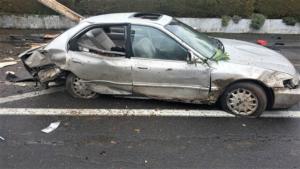 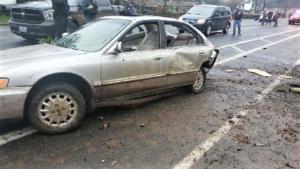 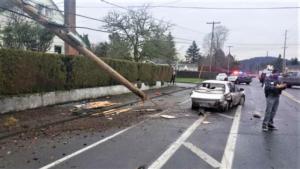 At about 8:50a.m., the U.S. Marshals attempted to block the vehicle Dahlen was in, however, the driver of the vehicle was able to escape the Marshals' efforts. The vehicle fled from the area, heading eastbound on Southeast Holgate Boulevard. Officers assigned to East Precinct set up spike strips near the 11000 block of Southeast Holgate Boulevard, which the vehicle occupied by Dahlen ran over. The vehicle's tires deflated, the driver attempted to swerve around another vehicle, lost control, and crashed into a retaining wall and a power pole near the 11400 block of Southeast Holgate Street. The impact damaged the pole and knocked wires onto the street. Dahlen fled from the crashed vehicle and an East Precinct officer took him into custody a short distance away. Another person in the car was also detained.

"It's clear that this individual has no regard for the safety of the public and will put others in danger in an effort to escape," said Chief Chuck Lovell. "I'm grateful to the United States Marshals Fugitive Task Force, the PPB Homicide Unit, the Tactical Operations Division, East Precinct patrol officers, and all who worked together to capture this dangerous fugitive. "

Previously released information about this is available here: https://www.portlandoregon.gov/police/news/read.cfm?id=271445