Park Rangers Threatened by Suspect with Machete, Arrest Made (Photo) 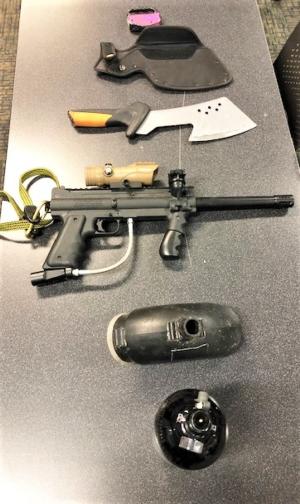 Portland Parks and Recreation Rangers, as well as a community member, were threatened by a suspect with an axe and a paintball gun in Downtown Portland.

On Saturday, April 3, 2021 at 10:09a.m., Central Precinct officers responded to the precinct front desk on a report that victim had walked in to report being shot by a suspect with a paintball gun. The victim told the officers he was riding his bicycle in Chapman Square Park, near the intersection of Southwest 3rd Avenue and Southwest Main Street. The victim said a suspect fired a paintball gun at him, striking him once. The suspect then fired several more paintballs toward the victim as he fled. The victim suffered a minor injury.

Officers located the suspect, Randy A. Graves, 32, and arrested him. They located and seized a paintball gun, axe, and stun gun (photo) from Graves.

Officers spoke to the Park Rangers on scene. They told officers that they had approached a group about 9:00a.m., intending to distribute fliers informing the group that the park was going to be closed for restoration work. Graves threatened to kill them, and although they did not report being threatened with a weapon, Graves followed them yelling threats to kill them as they tried to disengage.

About 45 minutes later, another team of Park Rangers responded to a fire burning in the park, which is a violation of park rules. Park Rangers reported requesting assistance from Portland Police as they went to address the fire. Graves pulled out an axe and threatened the Rangers If they did not leave. The Park Rangers also witnessed the attack on the community member with the paintball gun.