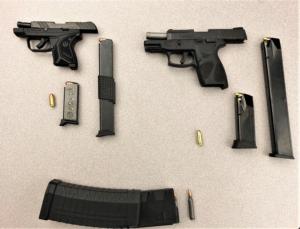 A suspect in a shooting case from October 2020 has been arrested and charged with Attempted Murder.

On October 24, 2020, at approximately 1:03 a.m., East Precinct officers responded to the 600 block of Southeast 162nd Avenue on reports of shooting. A victim was struck multiple times by gunfire causing severe injuries. Responding officers found the victim unresponsive and immediately provided medical treatment until paramedics could arrive and take over his care. The victim was transported to a hospital and treated for his injuries.

Since then, investigators assigned to the Assault Detail, and now the Enhanced Community Safety Team (ECST), have been pursuing the case and determined that the suspect was Raynold B. Anner, 36.

On April 8, 2021 at about 5:30p.m., near Southeast 82nd Avenue and Southeast Ash Street, ECST members conducted a traffic stop on a car Anner was driving. He was uncooperative and officers believed he was armed with a gun. But through de-escalation and communication skills, they were able to take Anner into custody without use of force or injuries to anyone. After the arrest, officers found Anner was armed with a loaded handgun in his sweatshirt pocket. Another gun and a large-capacity rifle magazine were seized from the vehicle he was in (photo).

Anner was booked into the Multnomah County Detention Center on charges of Attempted Murder in the Second Degree, Assault in the First Degree, Unlawful Use of a Weapon, and Unlawful Possession of a Firearm (2 counts).

The Portland Police Bureau is grateful for the assistance of the Polk County Sheriff?s office during this investigation.

"The diligent work of our skilled patrol officers and detectives has resulted in the capture of a dangerous criminal," said Chief Chuck Lovell. "I?d like to express my thanks to them and our partner agencies working to address the tragic rise in gun violence our community is experiencing."

On October 24, 2020, at approximately 1:03 a.m., East Precinct officers responded to the 600 block of Southeast 162nd Avenue on reports of shooting. Officers arrived on scene and found evidence of gunfire to include a subject who had been shot inside a crashed motor vehicle. Officers learned an altercation between two subjects occurred, leading them to shoot each other. After the shooting, the subjects went to their separate vehicles in an attempt to leave the scene. One of the subjects crashed their car near the location, striking other parked vehicles. This crash was most likely due to the subjects injuries sustained during the shooting. The other subject left the scene prior to police arrival.

The subject who remained on scene in the crashed vehicle was transported to an area hospital by ambulance, their medical status is unknown at this time. The other subject involved in this shooting is still outstanding.

Officers have secured a crime scene and Southeast 162nd Avenue is closed from Southeast Stark Street to Southeast Taylor Street.

Disturbance At Hospital Following Shooting Incident On Swan Island
May 18, 2021 13:33

PPB Responds to Shooting in the Powellhurst-Gilbert Neighborhood
May 16, 2021 19:43

UPDATE: Investigators Seek Information about Shooting near Ventura Park
May 15, 2021 17:21