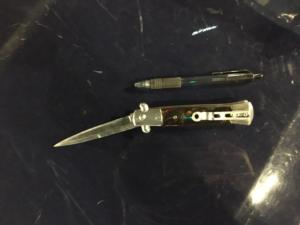 A victim is recovering after suffering multiple stab wounds downtown, and two suspects have been arrested.

On Thursday, April 15, 2021 at 1:03a.m., Central Precinct officers were dispatched to a report of a stabbing downtown. They were originally called to Southwest 4th Avenue and Southwest Oak Street, but after checking the area found the victim at Southwest Naito Parkway and Southwest Harvey Milk Street. The adult female victim was seriously injured. Paramedics responded and she was transported to the hospital by ambulance. Her injuries are not believed to be life threatening.

Officers located two suspects nearby, who were detained. Officers seized as evidence a knife they believe is involved (photos). Assault detectives responded to investigate. They booked Melissa M. Sheridan, 30, and Dorian T. Rhodes, 32, on charges of Assault in the Second Degree.