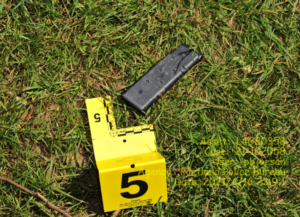 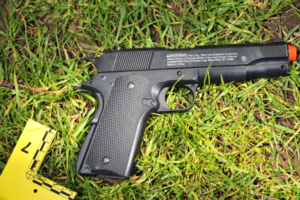 The Portland Police Bureau is releasing details related to the police involved shooting of 46-year-old Robert Douglas Delgado on April 16, 2021. This information is intended to provide the community with an update, but is not an exhaustive list of all information available or that may be available in this case.

This is an ongoing investigation. PPB works hard to be as transparent to the community and provide information as quickly as possible while trying to maintain the integrity of the investigation.

At approximately 9:28 a.m., on April 16, 2021, Portland Police officers were dispatched to Lents Park. A community member called the Bureau of Emergency Communication (BOEC) to report a man, later identified as Mr. Delgado, in Lents Park quick drawing and holding what looked like a handgun.

Photographs of the handgun and handgun magazine Mr. Delgado had are attached. The handgun was a replica.

Use this link to hear the portion of this call related to the timeline above.
https://youtu.be/e-2WjCx7DQY

The Portland Police Bureau is aware that information circulated about another person near the park, who was incorrectly identified has having been involved in this incident. There was a call earlier in the area regarding a man in traffic trying to hit passing cars. That man was offered medical attention and had left the area in an ambulance prior to the call about Mr. Delgado pointing a gun.

"The Portland Police Bureau is committed to sharing as much information as we can about critical incidents, while balancing the need to maintain the integrity of the investigation so we can all have confidence in the outcome," said Chief Chris Davis. "When police officers use deadly force, it impacts not only the people directly involved in the event, but families, neighborhoods, and the community as a whole. We ask for continued patience as we work through the complex process of investigation and administrative review in this case, and we will share information as we can."

The involved officer was interviewed by Internal Affairs within 48 hours of the incident pursuant to bureau directive.

The information in this release is only a portion of the information associated with this case. This is an active and ongoing investigation. The Portland Police Bureau's directive outlining the procedures followed after an officer involved shooting may be found at https://www.portlandoregon.gov/police/article/656780">https://www.portlandoregon.gov/police/article/656780

The Oregon State Medical Examiner?s office has completed the autopsy of the subject involved in yesterday?s officer involved shooting in Lents Park. He is identified as Robert Douglas Delgado, 46. His family has been notified of his death and provided the attached photograph for release. The autopsy revealed that Delgado died of a single gunshot wound.

The case remains under investigation and further details are not available.

Detectives have confirmed that there was a call involving a person at that same intersection earlier in the morning. We can confirm that call did not involve Delgado. The previous call, at 8:16a.m., was a welfare check on a white male with no shirt who was in traffic and trying to hit passing cars with a trash can. Officers arrived and worked with paramedics to get the 32-year-old man into an ambulance and transported to a hospital for treatment of a possible drug overdose. He was uninjured and not charged with a crime.

The officer involved in yesterday?s officer involved shooting is Officer Zachary Delong, an 8-year veteran of the Police Bureau assigned to East Precinct. He remains on administrative leave per Bureau policy.

The name of the subject involved will be released after the Medical Examiner positively identifies him and next of kin is notified.

Portland Police have completed the on-scene investigation at Lents Park and have cleared the scene. During the time that investigators were doing their work, law enforcement countywide responded to assist with crowd control. The hostile crowd estimated to be over 100 people tore down crime-scene police tape and encroached on the work area. A line of officers had to create a blockade on multiple sides of the scene to keep the crowd back. Officers were hit with sticks and full water bottles were thrown at them. A group of people grabbed an officer?s baton and tried to pull it away. Officers deployed OC (pepper) spray to stop the criminal behavior. At least one police vehicle?s tires were flattened. As officers began to disengage from the scene, hostile individuals chased them, throwing things at them. Officers deployed inert smoke canisters in an attempt to help them leave, but individuals continued after them. A Rubber Ball Distraction Device was used to allow the officers to safely disengage. No officers were injured. There were some false claims online that tear gas was used, but that was untrue. Officers did not deploy chemical munitions. No arrests were made.

The investigation into the officer involved shooting is continuing, and more information will be released when appropriate.

Officers arrived and contacted a subject in the park. During the encounter, less lethal 40 mm and lethal rounds were deployed. Two officers deployed 40 mm rounds and one officer used lethal force.

Medical personnel were staged nearby. Officers provided emergency medical aid, but the male subject was pronounced deceased at the scene.

None of the officers was injured during the incident and there are no known additional injured parties.

While detectives and other investigators were responding to the scene to commence the investigation into the incident, a hostile crowd arrived at the scene perimeter and began yelling at officers. Additional officers had to respond from all over the city to assist with crowd management so the investigation could be completed. Other calls for service were impacted as a result.

Detectives are currently processing the scene for evidence and interviewing witnesses. The Bureau may release additional information as appropriate. The involved officer will be interviewed by investigators within 48 hours. This remains an active investigation; as information becomes available for release, updates will be provided via press release.

The involved Bureau member is an 8-year veteran assigned to East Precinct. The member?s name will be released tomorrow, as per Bureau policy. The involved officer will remain on paid administrative leave until the completion of the Bureau, East County Major Crimes Team, and Multnomah County District Attorney Office's investigation.

"These are difficult circumstances for everyone involved and none of us want this outcome when we go about our daily work," said Acting Chief Chris Davis. "Investigating an officer use of deadly force is among the most important things we do, and it's critical that we take the time to do it right. I appreciate our community giving us the patience and time to get the whole picture about what took place. I pledge that we will release more information as the investigation proceeds."