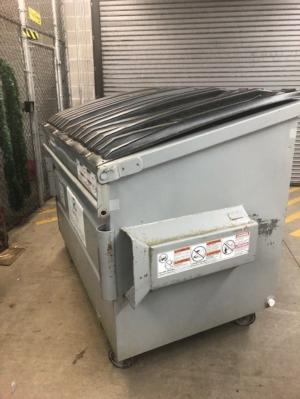 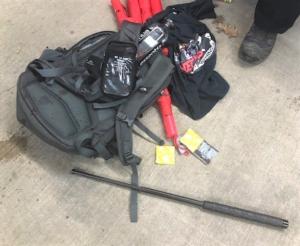 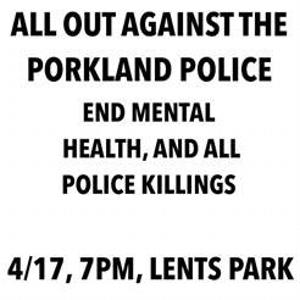 The demonstration advertised for Lents Park did not require any police response as there was no report of criminal activity, however a hostile crowd later formed outside East Precinct.

At about 10:00p.m., a group of about 70 people formed in front of East Precinct, 737 Southeast 106th Avenue. The group began moving into the street, blocking traffic. Many in the group wore helmets, body armor, and had heavy backpacks, which was consistent with the characteristics of those intent on criminal behavior.

Some individuals began to roll two large dumpsters from a nearby school into the street toward the precinct. Because dumpsters have been used many times as vessels to start fires, the Unified Command of Portland Police Bureau and Portland Fire & Rescue determined it was likely that this group?s intent was the same.

East Precinct is part of the city?s critical public safety infrastructure and a working precinct 24 hours a day. The crowd was warned by loudspeaker not to restrict access to the precinct, not to start fires, or block traffic. Despite the warnings, one dumpster was pushed up close to the front door and the other near the garage door.

Due to the criminal activity and clear intent to block access to the precinct, the group was advised by loudspeaker that it had become an unlawful assembly and they were directed to leave to the north. They did not comply so officers moved in and the group moved away as instructed. The officers discovered that one of the dumpsters smelled of smoke but had not caught fire. A collapsible baton and some other gear was dropped when they ran away (photos).

Officers moved the dumpsters inside the garage temporarily to keep the crowd from using them again. Members of the group remained in the area for a while but did not attempt to commit any more crimes, so police disengaged.

No arrests were made, no force was used by police, and no one was reported to be injured.


The City of Portland and downtown businesses are totaling up the damage from rioting, arson, theft, and vandalism last night. Reports are being compiled and there is no cost estimate, but it appears to be significant damage. Some additional photos of documented damage are attached. It was learned that looters stole about $2000 worth of product from the Nike store. On-site security personnel were able to prevent further losses. Additionally, as officers were keeping a perimeter around the Portland firefighters extinguishing the blaze at the Apple Store, officers heard shots fired nearby. Some officers were had to be diverted away to investigate the shots and look for any potential victims. Witness statements suggested someone fired into the air from a passing car and no one was injured. No arrests have been made and the case is still under investigation.

There is limited information about plans for criminal "direct action" tonight. A flyer being distributed (photo) suggests an event at Lents Park beginning at 7:00p.m. It does not refer to a direct action but does suggest that the group intends to go "all out" against police. As always, free speech and other constitutionally protected activity will not generate a police response, but criminal activity will. Anyone participating in criminal activity risk arrest and/or use of force. As we will be working under a Unified Command with Portland Fire & Rescue, arson and reckless burning will not be tolerated due to the fire danger.

"Last night, yet again, a group of self-described ?anarchists? attacked businesses, a church, and the Oregon Historical Society in downtown Portland. This ?direct action? did considerable damage to public and private property. It also tied up most of the public safety resources in the city, resulting in a significant backlog of calls for police service and long delays for people who needed and wanted our help. Fire Bureau resources were needed as the group set fires in public spaces, despite the unusually hazardous fire conditions.

"None of the criminal activity going on in the streets recently should be confused with the urgent and legitimate need for the Portland Police Bureau, the policing profession as a whole, and indeed the whole criminal justice system, to acknowledge where harm has been done by their work, and to evolve to better provide better, more compassionate, more effective service in the future. Chief Lovell, our leadership team, and the entire Portland Police Bureau are committed to this evolution, and to a vision of an organization and a system that live up to the ideal of equal justice under law. We will continue this work, and we will continue to show up to make Portland a safer place.

"In the coming days, we anticipate more such events, and we are working with the other city bureaus and our partners in other public safety organizations, such as the Multnomah County Sheriff?s Office and Oregon State Police, to protect our city from more destruction. These events are challenging for our police officers, sheriff?s deputies, and state troopers, but we are committed to upholding the rule of law while holding space for people to engage in legitimate, constitutionally-protected free speech. We don?t want to use police resources for events like the one we saw last night. Free speech and expression are values we took an oath to uphold; violence and wanton property destruction are crimes we took an oath to prevent.

"I want to thank the men and women of the Portland Police Bureau for their dedication and resilience over the events of the past year. The toll recent events have taken on you and your families is immeasurable. We haven?t always been perfect, as no human beings are, but you continue to care and to show up when a lot of people would have given up."