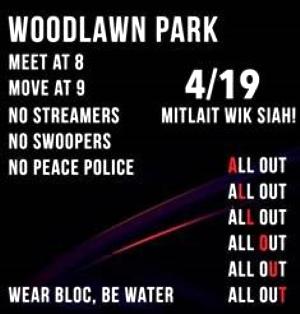 The Portland Police Bureau is aware that individuals are planning a so called "direct action" event this evening at Woodlawn Park (meeting at 8 p.m. with a 9 p.m. march). Such events have historically included wanton destruction of public and private property, violence and the active threat of harm by thrown or propelled objects, fire and impact weapons. Similarly advertised events promoted and then engaged in arson and riots.

This location is in a mixed residential and business neighborhood. In prior similar events, marches have led to North Precinct, located near NE Killingsworth Avenue and NE Martin Luther King Jr. Boulevard. The event advertised tonight may take place in or near the Woodlawn neighborhood. In the past, violent crowds have targeted the Portland Police Bureau?s North Precinct and employees with arson, including attempts to burn it down. In the past, direct action events have resulted in damage to local business, including many businesses owned by community members of color.

Advertised direct action events have disrupted major thoroughfares, interfering with emergency response by Portland Fire & Rescue to incidents not related to the direct action. The public could encounter traffic impacts in the area.

Community members who wish to demonstrate are always encouraged to do so, lawfully. The Portland Police Bureau is dedicated to supporting people's right to lawfully assemble.
Plans are underway for a police response to any violence or criminal activity that threatens the safety of community members or public employees or public or private property. People who engage in criminal activity are subject to the use of force and arrest.