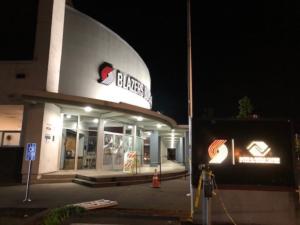 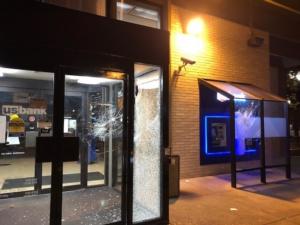 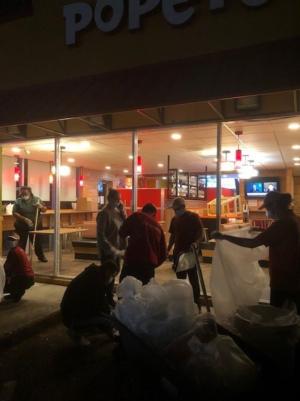 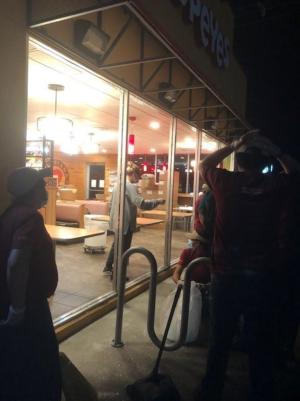 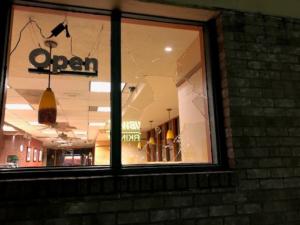 This release has been updated with more photographs of damage to businesses including Popeye's, Subway, and US Bank.

On Monday, April 19, 2021 between 8 and 9 p.m., a group of several dozen individuals dressed in "black bloc" clothing, gathered in Woodlawn Park. There was an event previously advertised on social media promoting a gathering and a march. This event was advertised in a similar nature to other recent events where "no peace police" was promoted and live-streamers were discouraged. Recently, there has been increased rhetoric on social media about live streamers and media being intimidated with threats to smash cameras and assault those trying to document events.

In the week prior to this event, there were two declared riots and one unlawful assembly following similarly advertised events where widespread criminal activity occurred, including arsons and substantial damage to businesses, non-profit agencies, and a police facility.
Just before 9:30 p.m., a group of about 75-80 people, along with support vehicles, began a march from Woodlawn Park to North Precinct.

As the crowd began the march, North Precinct officers responded to an unrelated call of a person shot near the 5100 block of North Albina Avenue at 9:26 p.m. Due to the multiple high risk incidents, city-wide police response was shifted to emergency calls only to increase the likelihood that officers would be able to respond to life safety emergency calls for service. This shooting was determined to be a homicide, which requires a significant number of police resources.

Popeye?s reported shattered windows after the crowd went past the location. As the group approached North Precinct, some individuals started pulling out umbrellas and shields. In prior events, these items have been used to keep cameras from capturing criminal acts and hide actions.

Windows were reportedly smashed at the U.S. Bank and an ATM machine was reportedly damaged. Warnings had been provided multiple times by the PPB sound truck warning those in the march not to engage in criminal acts or they would be subject to arrest, force and munitions.
Based upon the criminal activity, an unlawful assembly was declared at approximately 9:50 p.m. The crowd was ordered to disperse to the North. Despite numerous warnings the crowd failed to disperse.

After the unlawful assembly was declared and warnings were provided, people broke windows at the Boy?s and Girl?s Club located just south of the North Precinct. This is a non-profit organization whose mission is focused on empowering all young people to discover their full potential as caring, engaged, responsible community members.

The crowd focused briefly on North Precinct, then marched south down Martin Luther King Jr. Boulevard. The Natural Grocers sustained damage as marchers continued southbound. The group marched down to Prescott Street, then turned around and meandered through the blocks back in a northbound direction.

At about 11:00 p.m., the crowd size had diminished in size and many of the participants had dispersed.