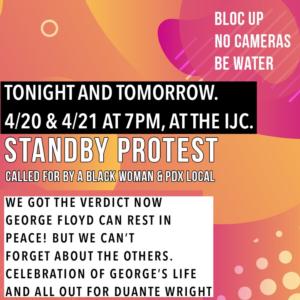 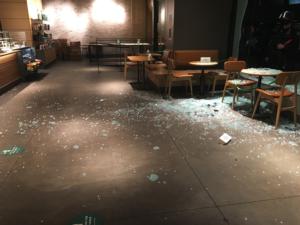 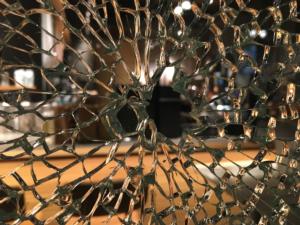 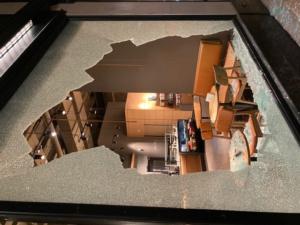 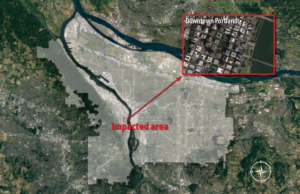 At 8:15p.m., approximately 100 people were gathered near the Justice Center and blocked vehicular traffic in the intersection of Southwest 3rd Avenue / Southwest Main Street. A dumpster fire was started near the area. The fire was ultimately extinguished by a community member. Out of an abundance of caution, the doors of the Justice Center were locked to prevent unlawful entry into the building.

At approximately 9:50p.m., one person began breaking and spray painting the windows of a local coffee shop near the area of Southwest 4th Avenue / Southwest Morrison Street. That person was taken into custody at 10:05p.m. and identified as 24-year-old Kenneth Harold. Harold was in possession of a glass punch tool and cans of spray paint. Harold was later booked into the Multnomah County Detention Center and charged with one count of Criminal Mischief in the First Degree.

At approximately 10:07p.m., a second person was arrested after a scuffle with officers. Videos of the arrest have been posted to social media by various bystanders, including some that did not provide the entire context of the incident. On our Twitter page, we shared the most complete video we could find. It showed a Portland Police sergeant walking his bike when a person dressed in all black stepped in his path. The sergeant moved the person aside, when another person punched the sergeant in the head. A scuffle began and the sergeant was knocked to the ground. The sergeant landed in a dangerous position, underneath the suspect and on his back. That?s when other officers moved in to stop the assault. In response to the violent conduct, some focused blows were used. Pepper spray was also deployed by an officer. After the suspect was handcuffed, officers rendered aid to help alleviate the effects of the pepper spray. The suspect was identified as 36-year-old Randy Gray. Gray was booked into the Multnomah County Detention Center and charged with Assaulting a Public Safety Officer, Assault in the Fourth Degree, Harassment, Disorderly Conduct in the Second Degree and Criminal Mischief in the Third Degree.

Due to the criminal activity and clear intent to destroy property, the group was advised by loudspeaker that it had become an unlawful assembly and they were directed to leave the area.

By approximately 11:00p.m., the demonstrations began winding down and officers in multiple capacities began patrolling the downtown area to deter additional criminal activity.

One thing to note, the area affected by the criminal activity was contained within few blocks of downtown Portland. This is not to minimize the impact to those who were victimized by the property damage, as we take any damage seriously. But the overall geographical area that was impacted was relatively small. A photo of the affected area had been provided for reference.

The Portland Police Bureau will continue to plan for a police response to any violence or criminal activity that threatens the safety of community members or public employees or public or private property. People who engage in criminal activity are subject to the use of force and arrest.


The Portland Police Bureau anticipates public gatherings following this afternoon?s verdict in the Derek Chauvin murder trial. We expect many community members will want to make their voices heard and may gather or march throughout the city. We encourage and support the lawful exercise of First Amendment rights.

However, we also have some indication that there may be events that could devolve into criminal activity. One event being advertised on social media is consistent with prior "direct action" events. The direct action event flyer indicates the event will start at 7:00 p.m. in the area of Chapman Square Park in Downtown Portland. The flyer also asks for people to wear all black, to make individuals harder to identify, and to leave cameras behind. That is an indication that some individuals intend to commit crimes and do not want there to be photographic evidence. A phrase on the flyer, "be water," suggests that they intend to move rapidly to help avoid law enforcement. Such events have historically included deliberate destruction of public and private property, threatening or intimidating behavior and violence, such as throwing dangerous objects, starting fires and weapons. Similarly, individuals at advertised events have engaged in arson and riots.

Portland Police will monitor activity downtown to determine what response may be appropriate, especially any violence or criminal activity that threatens the safety of community members, public employees or to public or private property. People who engage in criminal activity are subject to the use of force and arrest.

Acting Chief Chris Davis, who is filling in for Chief Chuck Lovell, has said that "those who think it is acceptable to put others? lives and livelihoods at risk through dangerous acts of violence and destruction are not furthering the cause for system change, but setting our entire community back by tearing it apart. This is not advancing any racial justice."

Downtown is not only the heart of the city of Portland, but there are many people who live and work there. Many businesses, both large and small, operate there. Direct action events have disrupted accessibility to the downtown community and interfered with emergency responses to incidents not related to demonstrations. The public should plan to encounter traffic impacts in the area.

Direct action events draw a significant amount of resources, including patrol officers, supervisors, detectives, and more, away from emergency calls elsewhere across the city. This forces PPB to prioritize incidents that present a danger to life safety. Lower priority calls may not be answered until direct action events end and resources are available. We ask for patience from our community. It may take more time to get to you. If possible, please report incidents online at portlandpolice.com. Or, if possible, try calling at a later time when appropriate.