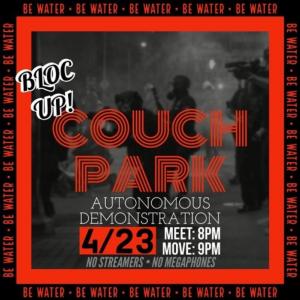 A march in the Northwest District Neighborhood became a riot when participants began blocking streets, breaking windows, applying graffiti, and pushed their way into a restaurant.

The event, which was billed on social media as an "autonomous demonstration," began in Couch Park at about 9:00p.m. with about 75 people mostly dressed in all black, or "bloc" attire designed to make it difficult for police to identify lawbreakers. The group began marching in the streets about 9:15p.m., and within 15 minutes reports of broken windows and graffiti came in. Some members of the group briefly forced their way into a tavern/restaurant in the 2200 block of Northwest Hoyt Street, then other participants followed them in and pulled them out. A resident who was taking video of the march had a rock thrown through his window. Graffiti was applied on a Tri Met bus shelter and a Moroccan restaurant at Northwest 21st Avenue and Northwest Northrup Street (photos).

The group was advised via loudspeaker and Twitter (@portlandpolice) that the behavior of the crowd constituted a riot and they were advised to leave to the north. Few if any of them complied. The group eventually wandered back into Couch Park and dispersed.

Officers arrested two people and booked in them into the Multnomah County Detention Center:

Jacob A. Camello, 29, of Portland ? Criminal Mischief in the First Degree (2 counts)

Camello was in possession of items used to cause criminal mischief (photo).

The Portland Police Bureau is aware of an event advertised as an "autonomous demonstration" beginning at 8:00 p.m. evening in Couch Park, 551 Northwest 19th Avenue (photo). Gathering and exercising free speech is legal, constitutional and encouraged, criminal activity is not.

The flyer for this event contains words such as "bloc up, be water, no megaphones, no streamers." Those words have been included on flyers for previous nights in which people in the crowd left their staging location armed with weapons and tools used to cause damage, wearing helmets, body armor, and gas masks and committed crimes such as riot, criminal mischief, arson, and assault. Language on the flyer discourages live streaming, which suggests they intend to commit crimes and want to limit the chance there will be video evidence that might be used to arrest and prosecute them. The flyer suggests there may be a march starting at 9:00p.m.

Portland Police will monitor activity related to this event to determine what response may be appropriate, especially if any violence or criminal activity takes place that threatens community members, public employees or public or private property. People who engage in criminal activity are subject to the use of force and arrest.

There are many people who live and work in this neighborhood. Many businesses, both large and small, operate there. Similar events have disrupted accessibility to the community and interfered with emergency responses to incidents not related to demonstrations. The public should plan for the possibility that there may be traffic impacts in the area.

An "autonomous demonstration" event can draw a significant amount of resources, including patrol officers, supervisors, detectives, and more, away from emergency calls elsewhere across the city. This forces PPB to prioritize incidents that present a danger to life safety. Lower priority calls may not be answered until direct action events have ended and resources are available. We ask for patience from our community as it may take more time for us to get to you. If possible, please report incidents online at https://portlandpolice.com . Or, if possible, try calling at a later time when appropriate. That said, there will be officers answering high priority calls, so do not hesitate to call if you need immediate police help.