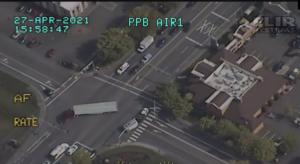 The Portland Police Bureau is releasing the video from the Air Support Unit of Tuesday's capture of a carjacking suspect:

"Great teamwork yesterday afternoon in the apprehension of a carjacking suspect who assaulted a landscaper in broad daylight before stealing a truck and trailer," said Chief Chuck Lovell. "This brazen attack was senseless and we hope for a quick recovery for the victim. Thanks to Gresham and Transit Police Officers for their assistance. Terrific work by the PPB Air Support Unit and officers on the ground for locating and capturing this dangerous perpetrator and increasing public safety."

The Tactical Flight Officer who assisted with this capture is available for an interview. Interested media contact ppbpio@portlandoregon.gov to make arrangements.

Collaborative efforts lead to arrest of carjacking suspect, return of truck and trailer to landscaping company. Employee sustains injury and is transported to area hospital.

On April 27, 2021, at 3:39 p.m., North Precinct Officers responded to a report of a possible carjacking where the driver was assaulted and a landscaping truck was taken from the 13400 block of Northeast Prescott Drive. The vehicle was described as a white Chevy 3500 dump truck hauling an enclosed trailer (See attached photographs).

The landscape company owner was able to check the GPS locater and let dispatch know an approximate location of the vehicle. The PPB Air Support Unit was able to locate the vehicle near 136 Avenue and Northeast Shaver Street. Patrol Officers caught up to the vehicle near 138 Avenue and Northeast Sandy Boulevard and attempted a traffic stop, but the driver fled in a reckless manner. The patrol vehicles did not pursue, but the airplane was able to follow. The suspect driver was reportedly driving into oncoming traffic and nearly struck two pedestrians.

The suspect driver turned into a residential neighborhood and stopped the vehicle near 186th Place and Northeast Wasco Street. The suspect ran from the vehicle and was apprehended with the help of North Precinct, Transit Police, and Gresham Police Officers.

The adult male victim was transported to an area hospital with what are believed to be non-life threatening injuries.

The suspect was identified as 30 year-old Benjamin Hendricks. He was booked into the Multnomah County Detention Center on charges of Robbery III, Unlawful Use of a Motor Vehicle, Elude and Reckless Driving.

The landscape company owner believes some tools were in the trailer that fell out when the suspect fled in the vehicle with the trailer door open. There is information to suggest another person took the tools that fell into the street including two weed eaters and a leaf blower. If anyone has information about this, they are encouraged to call non-emergency dispatch.

There are believed to be additional possible victims based upon the circumstances of the reckless driving. If anyone believes they are a victim or has information related to this case, they are encouraged to call non-emergency dispatch at (503) 823-3333 and reference case #21-112918.

For interested media partners, the landscape company owner is ok with media contact. Email the PIO for details.