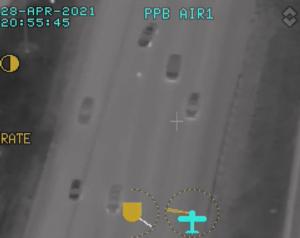 New information is available about the suspect accused of trying to carjack drivers on I-205 last night. The officers first noticed the car driving on Northeast Columbia Boulevard at extremely high speed, estimated at about 70 miles per hour. Due to traffic conditions they were not able to immediately attempt to stop the reckless driver, but notified the Air Support Unit (ASU). The airplane located the car, still going too fast, and helped guide officers to it. When officers attempted to stop the car with their overhead lights, the driver did not yield. In fact his driving behavior got worse, passing other cars at high speed and running a red light. The officers disengaged, but ASU followed the car to a motel parking lot at Northeast Killingsworth Street and Northeast Sandy Boulevard. He briefly went into a room, but then ran away down onto Interstate-205.

Video of the incident from ASU is available here: https://www.youtube.com/watch?v=f-jy15AgVg8

PPB is still interested in hearing from potential victims who were targeted by Scroggins. If you believe he tried to get into your car during this incident, please call non-emergency dispatch at 503-823-3333 and reference case number 21-114208. Additional charges may be added.

This incident highlights the value of some safety habits. First, the importance of paying close attention to the roadway while driving and avoiding distractions. Most drivers in this incident appeared to be extremely attentive and noticed the suspect on the freeway, braking heavily and swerving to avoid hitting him. He could have been struck and seriously hurt or killed if those drivers had not been so alert. Driving within the speed limit is also important as it gives you more time to react to unexpected hazards.

Also, it?s a good idea to lock your doors while driving. While an incident like this is exceedingly rare, it nevertheless shows that a locked door can help protect you from a person who poses a threat.


A suspect is under arrest after attempting to force his way into multiple passing cars on Interstate-205.

On Wednesday, April 28, 2021 at 8:45p.m., a North Precinct officer stopped a car for reckless driving in the area of Northeast Killingsworth Street and Northeast Sandy Boulevard. After pulling over, the driver tried to run away on foot, working his way down to Interstate-205 at Northeast Killingsworth Street. As officers pursued, the suspect ran out into the traffic, tried to flag down cars, then tried to open car doors as drivers slowed. He did this in both the northbound and southbound lanes. Officers believe he tried to get into as many as 8 vehicles before he was arrested. Only one of the potential victim drivers stopped to talk to officers.

If anyone believes they were a victim of an attempted carjacking on I-205 either direction around Northeast Killingsworth Street around 8:52p.m. tonight, please call non-emergency dispatch at 503-823-3333 and reference case number 21-114208.

The car the suspect was driving was determined to be stolen and is being recovered.

The suspect is not being identified as officers are still verifying his identity and determining appropriate charges. His name will be released after he is charged.