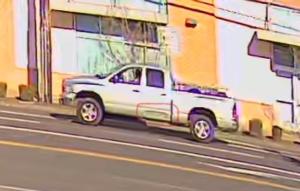 A man died nearly 2 weeks after being struck by a hit-and-run driver in the Hazelwood Neighborhood, and investigators are asking for help identifying the suspect and suspect vehicle.

On Sunday, April 11, 2021, at 5:13p.m., East Precinct officers were dispatched to a report of a crash at Northeast 122nd Avenue and Northeast Halsey Street. When they arrived, they found an adult male, who was believed to be operating a mobility scooter in the crosswalk, injured in the roadway. He was transported to a local hospital with injuries that at the time were believed to be non-life threatening. But on April 24, 2021 Portland Police investigators learned that the patient died at the hospital.

The pedestrian has been identified as Faustino Jurado, 47. His family has been notified of his death.

The driver of the involved vehicle did not stop at the scene and has still not come forward.

The Traffic Investigations Unit has obtained video depicting the collision and vehicle. Investigators are requesting assistance from the public with locating the involved vehicle (pictured). It appears to be a gray or silver 2002-2009 Dodge Ram 1500 pick-up with an extended cab. There is a prominent dent in the driver?s side rear passenger door (see highlighted photo). It may also have damage to the right side of the truck where the contact occurred.

If anyone has information about this case, please contact Traffic Investigations Officer Garrett Dow at Garrett.Dow@portlandoregon.gov or 503-823-5070.