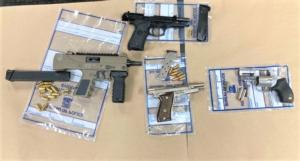 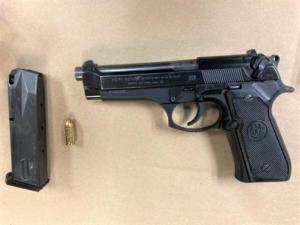 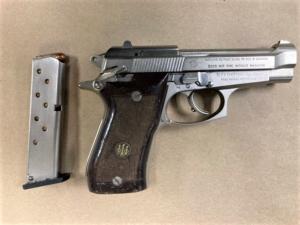 On Wednesday, April 28, 2021 at about 8:00p.m., Central Precinct officers responded to a report of a welfare check on someone who may have been assaulted in the area of Southwest 2nd Avenue and Southwest Morrison Street. Officers arrived and located a female with cuts and bruises to her face, along with a male companion. As officers investigated whether an assault had occurred, they learned the female, Monica A. Friedrich, 33, of Wapato, Washington, had a warrant for her arrest. As they took her into custody, the male, Christian A. Valdez, 27, tried to physically interfere. Officers had to physically hold him back. He left the scene but was located later nearby. He ran away from officers and was pursued. When he was caught, Valdez assaulted an officer during the struggle to arrest him. The officer was treated on the scene for non life-threatening wounds.

After searching a bag that both Friedrich and Valdez possessed, they located four loaded firearms (photos), including one with a restricted foregrip.

Officers were not able to establish probable cause that Friedrich was assaulted. That part of the investigation is ongoing.

Friedrich was issued a criminal citation for Unlawful Possession of a Firearm (3 Counts), and a city code violation of Possession of a Loaded Firearm in a Public Place (3 Counts). She was also cited for her warrant.

Valdez was booked into the Multnomah County Detention Center on charges of Assaulting a Police Officer, Felon in Possession of a Firearm, Interfering with a Peace Officer, Resisting Arrest, and Possession of a Loaded Firearm in a Public Place (city code).