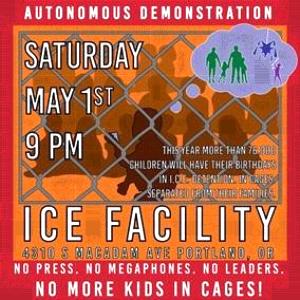 *Correction* The original release had the incorrect day of the week included. The release has been updated to indicate the correct day, which is Saturday.

The Portland Police Bureau would like to inform the public there are multiple gatherings planned throughout Portland on Saturday, May 1, 2021. Demonstration activity is scheduled to begin at approximately 12:00 p.m. and could last until the evening. At this time, there are no known plans or permits for street marches associated to any of the events.

Events are being held in Holladay Park, Downtown, Peninsula Park, Salmon Springs Fountain, and Shemanski Park at various times during the afternoon and evening. There is also a known march/car caravan that may impact traffic downtown in the mid to late afternoon. There may be other locations that are impacted as well as events can be fluid in nature.

There are two events being promoted as "Autonomous Demonstration" events for 9 p.m. at Shemanski Park and the ICE facility on South Macadam. The event flyers say "no streamers" "no media" and "no peace police." These are similar in nature to other recently publicized events where criminal activities occurred including arson, burglary, criminal mischief, vandalism and graffiti. While we hope those engaged in these events are peaceful and lawful, PPB is prepared in the event they are not.

"The Portland Police Bureau strongly supports the lawful engagement in First Amendment activities," said Chief Chuck Lovell. "In the recent past, some groups and individuals have tarnished the reputation of Portland by committing criminal acts during gatherings and marches. Portland has a long history of peaceful gatherings and marches and our hope is those who gather will do so in a peaceful and lawful manner. If not, we are prepared to respond as appropriate and arrest those engaged in criminal activity that undermines public safety for all."

The Police Bureau attempts to work with all event organizers to establish an environment where community members may safely practice their First Amendment Rights of speech and assembly. The Police Bureau Liaison Team is available to assist event organizers in planning a safe event for participants, Portland community members, and businesses. Liaison Officers may be contacted at: PPBLiaison@portlandoregon.gov or through its Twitter account: @PPBLiaison

* Event organizers to communicate with liaison officers so the Police Bureau is aware of the needs and intentions of the groups represented by the respective organizers;
* People who observe suspicious items or activity or are aware of incidents that place a person's life, safety or property in danger should contact police in person or by calling 9-1-1 if you can; text 9-1-1 if you can't. Texts to 9-1-1 cannot include emoticons, emoji's, pictures, or videos;
* People near others who are preparing to or in the act of committing criminal behavior are encouraged to separate themselves from the group and notify police; and
* Listen to and adhere to directions provided by the Police Bureau's public address vehicle. The announcements provide important information about officers' observations, what actions demonstrators and counter-demonstrators must take and what action the Police Bureau may take.

Although there are no known plans or permits issued for street marches associated with any of the known events, the Portland Police Bureau encourages road users to be aware of the potential for traffic interruptions should a spontaneous march develop during the day. People engaged in demonstration march activity should remain on sidewalks and obey traffic laws.