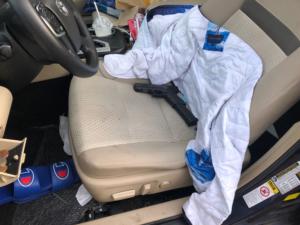 A wanted suspect has been arrested with an illegally modified semiautomatic pistol with extended magazine.

ECST/FSD coordinated with members of the PPB?s Air Support Unit and the Special Emergency Reaction Team to safely arrest Brazile, who was seated in a stolen vehicle. At the time of his arrest, Brazile was armed with a loaded .45 caliber pistol with an extended magazine which he was sitting on in driver?s seat of the vehicle (photo). Upon inspection of the pistol, it appears to be equipped with an "auto-sear" device which was later determined to be missing parts rendering it inoperable. These illegal devices, when affixed to a pistol, allow a semi-automatic firearm to fire in a fully automatic manner when the trigger is depressed.

Brazile was wanted for several outstanding warrants (including this previously released incident: https://portlandoregon.gov/police/news/search.cfm?id=301556&mode=read )

Brazile was also charged with Unauthorized Use of a Motor Vehicle and Felon in Possession of a Firearm. He was booked into the Multnomah County Detention Center.

The investigators from ECST and FSD appreciate information from several members of the public which aided them in locating Brazile.