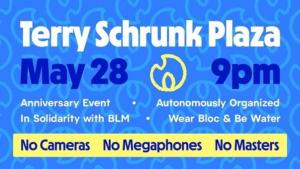 The Portland Police Bureau is aware of an event planned tonight commemorating the anniversary of the first protests in Portland following the death of George Floyd. Elements contained in the flyer are similar in nature to past ones that promoted "Autonomous Demonstration" including criminal activity and the use of fire. Portland Police will have extra resources assigned to monitor this event.

The flyer states attendees should "wear bloc & be water," suggesting participants will dress in similar black colored clothing to make it more difficult to distinguish lawbreakers, and that they may plan to march quickly in an effort to stymie law enforcement efforts to prevent destruction. Likewise, "no cameras" suggests that some might commit crimes and do not want photographic evidence that can be used against them later. Finally, the graphics suggest stylized flames, encouraging the use of fire. This is extremely dangerous.

The Portland Police Bureau encourages lawful, peaceful gatherings that allow people to demonstrate and to exercise their first amendment rights. But in cases where events are advertised in this manner, Portland Police will monitor activity related to these events to determine what response may be appropriate. PPB will respond if violence or criminal activity takes place that threatens the safety of community members, public employees or to public or private property. Members of the public should be aware that traffic may be disrupted in the downtown area if there is a march, and community members passing through affected areas should plan accordingly.

Police response to criminal and or violent activity can draw a significant amount of resources, including patrol officers, supervisors, detectives, and more, away from emergency calls elsewhere across the city. This, combined with the a critical staffing shortage forces the Police Bureau to prioritize calls that present a danger to life safety. Some calls may not be answered until events end and resources are available. We ask for patience from the community as response may delayed, depending on circumstances. If possible, please report incidents online at https://portlandpolice.com or try calling at a later time to make a report.

The Police Bureau encourages:
* Event organizers to communicate with liaison officers so the Police Bureau is aware of the needs and intentions of the groups represented by the respective organizers;
* People who observe suspicious items or activity or are aware of incidents that place a person's life, safety or property in danger should contact police in person or by calling 911 if you can, text 911 if you cannot. Texts to 911 cannot include emoticons, emojis, pictures, or videos;
* People near others who are preparing to or in the act of committing criminal behavior are encouraged to separate themselves from the group and notify police; and
* All present to listen to and adhere to any directions provided by the Police Bureau public address vehicle. The announcements provide important information including directions, what actions demonstrators must take and what action the Police Bureau may take.

Although there are no known plans or permits issued for street marches associated with tonight's event, the Portland Police Bureau encourages road users to be aware of the potential for traffic interruptions should a spontaneous march develop. People engaged in demonstration activity should remain on sidewalks and obey traffic laws.