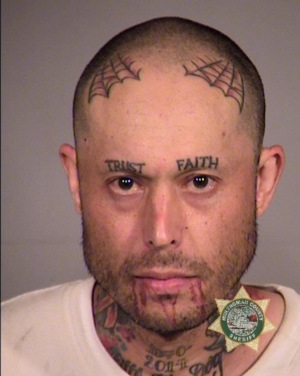 On Friday, June 25th, the Oregon State Medical Examiner?s office completed the autopsy of the subject involved in Thursday?s officer involved shooting. He was identified as Michael Ray Townsend, 40. The autopsy revealed that Townsend died of a gunshot wound. Townsend?s family has been notified of his death. They did not provide a photograph and do not want to speak to the media.

The case remains under investigation and further details are not available at this time.


Further information is being released regarding the officer involved shooting Thursday evening.

The autopsy on the subject involved has been performed by the Oregon State Medical Examiner's Office. The cause of death was gunshot wound. He has been identified, but investigators have not been able to locate family. That effort is continuing, therefore, his name is not being released.

A photograph of a weapon that has been seized as evidence is attached. Additionally, surveillance video that captured the incident is available here: https://youtu.be/ZvBMgqobew8 (This video is graphic; discretion is advised). A complete timeline of events is not being released at this time as information is still being gathered.

"While the investigation is still in its early stages, and releasing evidence at this point is rare, providing this video is critical to combat misinformation being spread," said Chief Chuck Lovell. "Transparency and community trust are extremely important to us, but so is a full, complete, and thorough investigation. This illustrates how important it is to allow the investigation process to unfold before spreading unverified information. An officer use of deadly force is among the most important investigations that we do, and it's crucial that we take the time to do it right."

The subject involved in the officer involved shooting has died at the hospital.

The subject involved was transported to a hospital by ambulance. Despite lifesaving efforts by medical personnel, he was deceased.

The Portland Police Homicide Unit is on scene investigating (photo). If anyone has information about this incident and has not already been interviewed by officers, please contact Detective Travis Law at Travis.Law@portlandoregon.gov 503-823-0395 or Detective Jeff Pontius at Jeffery.Pontius@portlandoregon.gov .

"We are early in this investigation. Preliminary information suggests our officer encountered a very difficult and dynamic situation that no officer wants to face," said Chief Chuck Lovell, who was on scene. "I want to thank all our members who responded to the scene as well as those who were out taking emergency calls in the city. I?m thankful and proud of their efforts."

The Chief briefed the police commissioner, and a mayor?s policy advisor was on scene.

During the investigation, a group gathered at the crime scene and began yelling, throwing items at officers, and attempting to interfere with the investigation (photo). One officer?s baton was grabbed and she was being pulled toward the crowd. Other officers quickly intervened. Someone from the crowd pepper sprayed an officer. At least one police vehicle's tires were punctured and a window broken. Police officers citywide were called to assist with scene security.

The involved Bureau member's name will be released tomorrow, as per Bureau policy. The involved officer will remain on paid administrative leave until the completion of the Bureau?s and Multnomah County District Attorney Office's investigation.

The Bureau may release additional information as appropriate. The involved officer will be interviewed by investigators within 48 hours.

Photo 2: Investigation scene with detectives and criminalists working inside. A police car with lights flashing is parked at the scene.

An officer involved shooting investigation is underway in the Lloyd Neighborhood, in the 500 block of Northeast Holladay Street. One man has been transported to the hospital by ambulance. All officers are unhurt. There is no ongoing threat to the community.