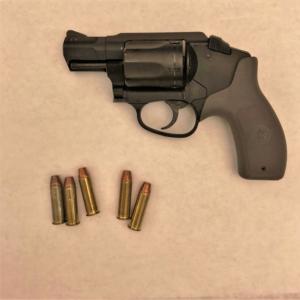 Through collaboration with multiple Portland Police divisions, a suspect connected to armed robberies and gun crimes all in the Cully Neighborhood has been arrested and a gun has been seized.

On July 3rd, 2021 at 8:33a.m., North Precinct officers responded to the area of Northeast 60th Avenue and Northeast Killingsworth Street on the report a male was firing a gun into the air. Officers responded and spoke to witnesses, but were unable to locate the individual involved at the time.

On July 8th, 2021 at 3:14p.m., a business in the 6000 Block of Northeast 60th Avenue was robbed at gunpoint. No one was injured. The suspect was not located, however assigned robbery investigators were able to determine the suspect in this robbery was the same individual who had previously fired shots on July 3rd. They continued to work on the case.

On July 21st, 2021 at about 12:26p.m., a shooting occurred at a business in the 5900 Block of Northeast Killingsworth Street where a male suspect fired multiple rounds at a victim. Fortunately the victim was not injured. The suspect had left the scene and responding officers were not able to locate him at the time. Enhanced Community Safety Team (ECST) investigators responded and were able to establish that the suspect in this incident was the same individual from the July 3rd and July 8th incidents.

On July 27th, 2021 at about 9:25a.m., a business in the 5800 Block of Northeast Prescott Street was robbed at gunpoint. There were no injuries. North Precinct patrol officers responded and recognized the suspect description was similar to that of the suspect in the previously mentioned cases. Further investigation confirmed that the suspect in this robbery was the same individual involved in the July 3rd, July 8th, and July 21st incidents. North Patrol, ECST, and Robbery Division personnel worked together and were able to positively identify the suspect and an associated residence.

On July 28th, 2021 at about 1:46a.m., the Special Emergency Reaction Team (SERT) and the Crisis Negotiation Team (CNT) executed a high risk warrant service at a residence in the 5900 Block of Northeast Killingsworth Street and arrested Michael Darnell Cunningham III, 28, of Portland. During the warrant service, Cunningham armed himself with a handgun. Due to significant police resources dedicated to the warrant, he was surrounded and unable to escape. Negotiators were able to talk to him from a safe position of cover. Cunningham did not surrender however, and a K9 unit police dog was used to help safely take Cunningham into custody.

A subsequent search warrant was executed at Cunningham’s residence where pictured firearm was recovered as well as other evidence connected to the mentioned cases.

Cunningham was booked into the Multnomah County Detention Center on charges of Attempted Murder in the Second Degree, Attempt Assault in the First Degree, Robbery in the First Degree (2 counts), Unlawful Use of a Weapon (3 counts). Further charges may be forthcoming after the District Attorney's office reviews the involved cases.

Anyone with information about these cases or any others that may involve Cunningham can reach out to ECST or Robbery. Please reference case 21-199717 and e-mail crimetips@portlandoregon.gov or call 503-823-0400.