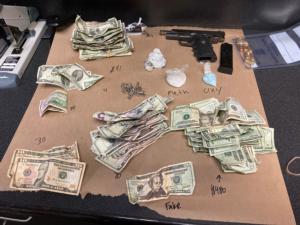 A large amount of drugs and money were seized while officers were conducting a welfare check in a vehicle.

On Tuesday, July 27, 2021 at 11:06a.m., Central Precinct officers responded to a welfare check call on two individuals partially conscious in a still running vehicle at West Burnside Street and Southwest 20th Avenue. As the officers approached, they could see the handle of a pistol in the front waistband of the driver. The passenger attempted to grab the pistol from the driver. Officers drew their firearms and ordered the passenger to drop the gun. She complied and both suspects were taken safely into custody.

Photo description: Evidence spread on a table, including a semiautomatic gun, ammunition, drugs in baggies, and cash