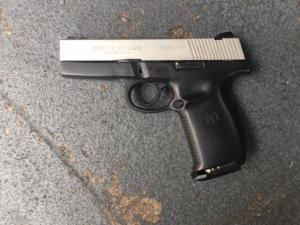 Investigators have confirmed that there was at least one more shooter during this incident, and they're requesting help from witnesses to help locate those involved persons.

The Enhanced Community Safety Team (ECST) is investigating this shooting and has recovered evidence of at least one other gun being fired. They believe a group of people may have been pursuing Anderson shortly before the gunfire started. They're working to determine if there were any potential victims and/or suspects in that group.

Investigators are still asking for video as they believe numerous people were recording the events leading up to the shooting.

If anyone has information, please e-mail crimetips@portlandoregon.gov and reference case number 21-233538.

A man is facing charges for firing a gun in downtown Portland.

On Sunday, August 22, 2021 at 5:47p.m., Central Precinct officers responded to a report of shots heard in the area of Southwest 2nd Avenue and Southwest Yamhill Street. Officers learned of a suspect firing a gun, a description, and a direction of travel. Three minutes later they located the suspect at Southwest 3rd Avenue and Southwest Alder Street. He was arrested and a gun was seized as evidence (photo). Officers booked Dennis G. Anderson, 65, of Gresham, into the Multnomah County Detention Center on charges of Unlawful Possession of a Firearm and Unlawful Use of a Weapon.

No one reported injuries. There were numerous people in the area, including several people taking video and photographs. There are reports that witnesses may have removed evidence from the scene before police arrived. If anyone was a victim, is in possession of evidence of a crime, has information about this incident, or has photos/video of evidentiary value, please e-mail crimetips@portlandoregon.gov and reference case number 21-233538.

There is no confirmed connection to any events or gatherings. The investigation is continuing.