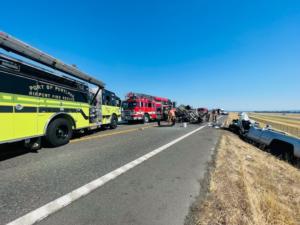 The preliminary investigation suggests speed and unsafe passing in a no passing zone were contributing factors in the crash. These are the 41st and 42nd traffic fatalities in 2021.

A two vehicle head-on crash on Northeast Marine Drive has left one driver deceased, and another driver in the hospital with critical injuries.

On Saturday August 28, 2021 at 12:25p.m., Port of Portland Police and North Precinct officers were dispatched to a report of a crash in the 7900 block of Northeast Marine Drive. When they arrived they found a sedan and pickup truck involved. The driver of the sedan, an adult female, is deceased. Portland Fire and Rescue, Port of Portland Fire Department, and American Medical Response also responded and extricated the pickup truck driver. The adult male patient was transported to the hospital with life threatening injuries.

The Portland Police Major Crash Team is on scene investigating. Northeast Marine Drive is closed between Northeast 33rd Drive and Northeast 122nd Avenue. The PIO is not responding to the scene. More information will be released when appropriate.

Photo description: police and firefighters on scene of crash, two damaged vehicles nearby