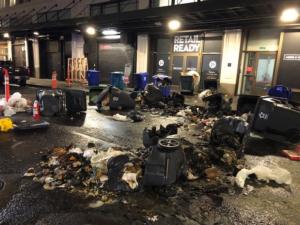 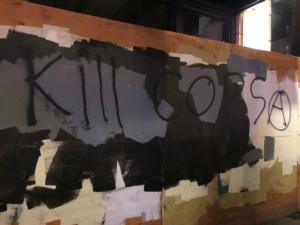 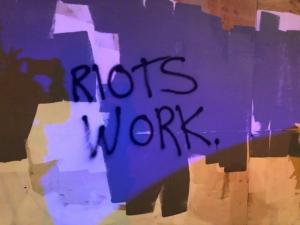 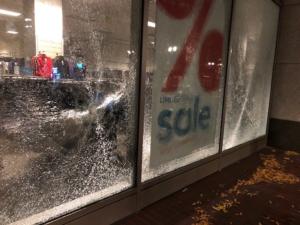 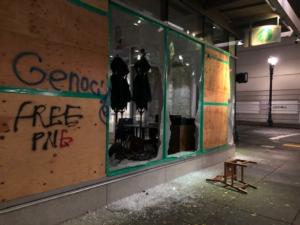 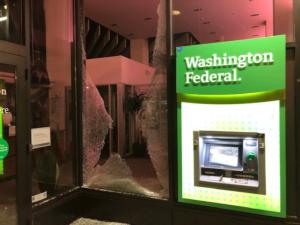 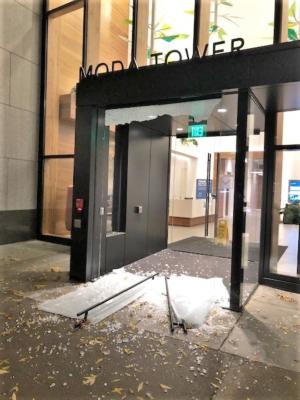 ***This update repairs some broken links, adds photo descriptions, and updates some details***

A group of around 100 anarchists caused substantial damage to businesses and government buildings in downtown Portland Tuesday night.

On October 12, 2021, at about 9:00p.m., Central Precinct officers learned that a group had gathered in the area of Chapman Square Park, and some participants were blocking Southwest 3rd Avenue. Some fencing from the park was used to barricade the street. Some illegal aerial fireworks were set off, as well as graffiti to buildings. At about 10:00p.m., the group began to march. Mostly within a time span of about 10 minutes, participants broke numerous windows and bank ATMs (photos). Officers were called to respond citywide, and all but the highest priority life safety 911 calls were left to hold so officers could be dispatched. At the same time, the group began to light garbage cans and dumpsters on fire in the street.

When resources arrived, the crowd was given direction to disperse by loudspeaker. A Mobile Field Force moved in and the crowd splintered into multiple directions. Some group members laid down in front of police vehicles to attempt to prevent police response. Police believe that some people involved in criminal activity were changing clothes as they were moving to further stymie efforts to identify them. Two unexploded illegal fireworks were recovered along the march route (photo). The group had largely dispersed by 11:00p.m.

Investigations into the criminal behavior are underway. No arrests have been made yet. At this point the damage is believed to be in excess of $500,000, and reports are still being compiled. There were 35 separate locations that were targeted, including banks, retail stores, coffee shops, and government buildings. If anyone has information about who committed crimes, please notify crimetips@portlandoregon.gov attention: Central NRT.

"I'm concerned about the brazen criminal acts that took place downtown last night," said Chief Chuck Lovell. "I want to assure those who were victimized that investigations are underway, and we will do whatever we can to identify and arrest those who were responsible. We ask that anyone with information please reach out to us. Thank you to all the officers who responded to a challenging situation."

Photo descriptions:
1. Three retail store windows are cracked and splintered
2. A dumpster in the street with flames shooting out of the top
3. A rough circle of plastic rolling garbage cans charred and melted in the street
4. A double glass door of a business tower building shattered and torn off its hinges
5. Graffiti spells out the words "KILL COPS"
6. Graffiti spells out "RIOTS WORK"
7. A coffee shop, already partially boarded up, has its windows shattered
8. A bank ATM screen and window is shattered