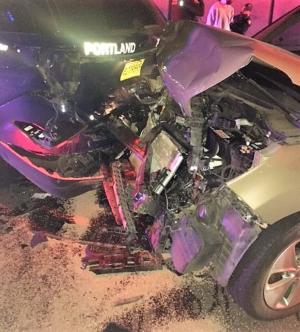 While officers were handling a minor injury crash on I-84 eastbound near Northeast 33rd Avenue, a driver rear-ended a patrol vehicle with two officers inside.

On Friday, November 19, 2021 at 11:57p.m., Central Precinct officers were dispatched to a report of a 4-vehicle crash on eastbound Interstate-84 near Northeast 33rd Avenue. The occupants of the vehicles were not seriously hurt.

As tow trucks were responding to remove the damaged vehicles, two officers were sitting in their fully marked police vehicle with overhead emergency lights activated to alert approaching cars of the blocked lanes of travel.

At 12:48p.m., the officers radioed that their vehicle had been struck by another vehicle (photos). The impact was at freeway speeds. The officers suffered some pain but no serious injuries. The officers were transported by police vehicle to the hospital, treated, and released. The driver and only occupant of the other car, a 2014 Kia Soul, was transported to a hospital for an evaluation but was also not seriously injured. After an investigation, the driver was taken into custody on suspicion of DUII.

Sean D. Hoffman, 22, of Tigard, was arrested and booked into the Multnomah County Detention Center on charges of Driving Under the Influence of Intoxicants, Reckless Driving, Assault in the Fourth Degree (2 counts), and Criminal Mischief in the Second Degree.