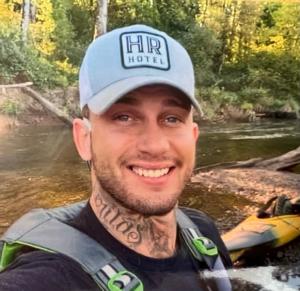 The deceased suspect is identified as Brandon L. Keck, 30. His family has been notified of his death and provided the attached photograph of him for public release.

Detectives continue to investigate the chain of events involving Keck and investigative work on those events is ongoing. They've determined that the female victim who reported that she had been shot was not in fact injured by gunfire. They're working to determine the cause of her injury.

Detectives believe there may have been other violent incidents involving the suspect before police officers intervened. The Portland Police Bureau is still asking anyone who has not talked with police and has information they believe is related to this suspect to contact them: Detective Erik Kammerer at Erik.Kammerer@portlandoregon.gov 503-823-0762 or Detective Shaye Samora at Shaye.Samora@portlandoregon.gov 503-823-0768.

Portland Police Detectives continue to investigate the officer-involved shooting that occurred yesterday , December 6, 2021, involving a carjacking suspect on I-5. Detectives believe the suspect committed multiple additional crimes and are attempting to gather all information related to his criminal activity prior to the shooting.

***Original message below***
The officer involved in this shooting is Officer John Hughes, a 17-year veteran of the Portland Police Bureau. He will be interviewed within 48 hours of the incident and will remain on paid administrative leave until the completion of the investigation.

***Original message below***
The media staging location will be in the northeast corner of the Interstate Fred Meyer parking lot. The PIO will brief the media at 12:55p.m.

On Monday, December 6, 2021, shortly before 10 a.m., Portland Police responded to I-5 in the area of Rosa Parks Way regarding an armed suspect involved in multiple carjackings. During the commission of one of the carjackings, the suspect fired a shot which injured a victim. The victim is being treated at an area hospital for a non-life-threatening gunshot wound. At some point, deadly force was deployed by police. Police have shut down I-5 in both directions, but hope to open southbound lanes soon. There is no further danger to the public.

Due to the logistical issues of the crime scene and the resulting traffic, the Public Information Officer and others are still arriving at the scene. The PIO will inform media soon on an appropriate staging area once he arrives at the scene and is able to gather additional information.