Arrest Made After Shots Fired Near Montessori School (Photo) 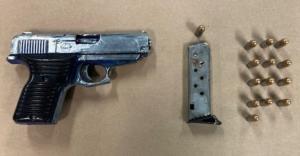 On Monday, January 3, 2022, at 12:49pm, Central Precinct Officers were dispatched to the area of Northwest 15th Avenue and Northwest Thurman Street after someone called 911 to report hearing two shots they believe came from a distinctive vehicle, which left the scene at a high rate of speed. A Central Precinct Sergeant located the vehicle and conducted a traffic stop on it at Northwest 3rd Avenue and Northwest Davis Street. A handgun, and other evidence, was clearly visible inside the vehicle, and its occupant, Crystal Lee Bartlett, was taken into custody.

The Enhanced Community Safety Team (ECST) was conducting an investigation on a separate incident and was unavailable, so the Central Precinct Neighborhood Response Team (NRT) provided investigative support. They were able to locate video which corroborated the 911 caller’s information. Central NRT recovered the pictured .380 caliber pistol, 17 rounds of ammunition, and a spent shell casing from Bartlett’s vehicle.

No bullet strikes were located as a result of this shooting, and nobody was injured, however, since the shooting occurred in front of Childpeace Montessori School, this caused extra concern for responding officers. Central NRT members contacted the school and provided appropriate information for concerned parents and staff.