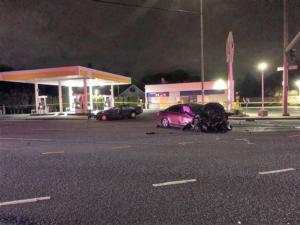 The passenger who died is identified as Douglas J. Kereczman, 40, of Beaverton, Oregon. His family has been notified of his death.

One note of clarification, the 3rd occupant who was believed to have been farther away than the other two actually returned to the scene in a different vehicle and contacted police.

In 2021 Portland City had 67 traffic related deaths. This was the highest number of traffic fatalities in 34 years, since 1987. In 2021 at this time there had been 4 traffic deaths, only 1 of those was criminal in nature. Thursday night’s crash was 2022’s 7th traffic related death. This year, as of Thursday, there have been 5 criminal traffic deaths in the City of Portland (a 500% increase over last year to date).

Three people were detained after a search of the neighborhood after Thursday's night's fatal crash and one man is charged with crimes.

Preliminary investigation indicates that a Honda Accord with three occupants collided with a Toyota Camry with two occupants (photos). The passenger of the Toyota was deceased at the scene despite life saving efforts. The driver of the Toyota was transported to the hospital with serious injuries that are not believed to be life threatening.

Officers quickly began setting up a perimeter to search for the three people seen running from the Honda. Two were detained nearby, and a third was located a short time later further away. The Major Crash Team determined the driver was Ayzaiah J. Walker, 22. After an investigation, he was booked into the Multnomah County Detention Center on charges of Manslaughter in the Second Degree, Assault in the Third Degree, Driving Under the Influence of Intoxicants, and Reckless Driving. No other arrests were made and investigators are not currently seeking any other suspects.

However, during the McLoughlin crash investigation, another driver proceeded into the closure area and nearly hit an officer. That person was determined to be driving impaired and arrested.

This investigation was concurrent with two other significant incidents in Central Precinct.

Central Precinct officers also responded to a serious injury crash that was dispatched at 11:33p.m., two minutes after the McLoughlin crash. This one happened at Southeast Grand Avenue and Southeast Stephens Street, when a driver of a Lexus crashed into a light post and multiple trees. The driver was pinned in the vehicle and later extricated by Portland Fire and Rescue. He was transported to the hospital with potentially life-threatening injuries, but after several hours of lifesaving efforts by medical personnel his prognosis was upgraded and he is expected to survive. A stolen firearm was located in the vehicle and seized pending further investigation.

Shortly after midnight, officers were dispatched to the area of Northwest 2nd Avenue and Northwest Flanders Street on a report of dozens of people fighting in the street and shots fired. North Precinct officers responded to handle the incident as all Central units were unavailable. Officers discovered evidence of gunfire, but no known injuries or property damage. The Enhanced Community Safety Team (ECST) is investigating this shooting and is asking anyone with information to e-mail crimetips@portlandoregon.gov attn: ECST and reference case number 22-18823.

A crash involving two vehicles on Southeast McLoughlin Boulevard is a hit and run.

On Thursday, January 20, 2022 at 11:31p.m., Central Precinct officers responded to a report of a serious injury crash on Southeast McLoughlin Boulevard and Southeast Holgate Boulevard. When they arrived they found two vehicles involved. One vehicle's occupant was deceased at the scene, and another occupant was seriously injured and transported by ambulance to the hospital. The other car was unoccupied and witnesses reported multiple people running from the scene before police were called.

The Portland Police Major Crash Team is enroute to investigate. During the investigation, Southeast McLoughlin Boulevard is closed between the Ross Island Bridge and Southeast Milwaukie Avenue.

If anyone has information about the incident, please contact crimetips@portlandoregon.gov, attention Traffic Investigations Unit, and reference case number 22-18796, or call (503)823-2103.