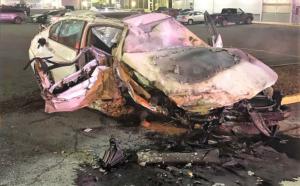 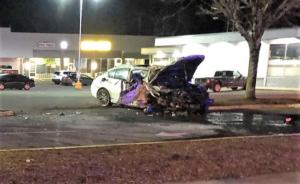 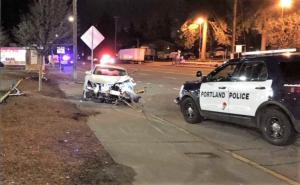 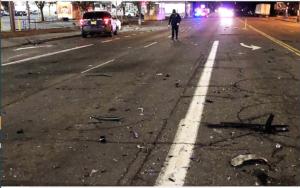 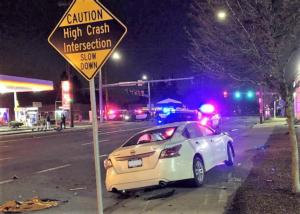 On Saturday, January 22, 2022 at 12:42a.m., two East Precinct officers were stopped at a red light at Southeast 122nd Avenue and Southeast Division Street when a driver in a white 2007 BMW 328i sedan going southbound 122nd Avenue proceeded through a red light. The officers activated their police overhead lights to initiate a traffic stop for the violation. The driver immediately increased his speed, clearly indicating he did not intend to pull over as required by law. The officers did not pursue, turning off their overheads and slowing down. However, despite no police officers pursuing the driver, he continued at a high rate of speed southbound on Southeast 122nd Avenue.

At Southeast Powell Boulevard, the BMW driver ran another red light and collided with a white 2015 Nissan Altima sedan going eastbound on Southeast Powell Boulevard. The impact caused the BMW to roll several times and land in a nearby parking lot on its wheels. The car caught fire. Responding officers saw there was a passenger stuck in the burning BMW. An officer had to climb in the driver's side in an effort to clear enough debris to free the passenger's legs. They were able to pull the patient free and moved him away to a safer area. Another officer used fire extinguishers on the burning car. It seemed to slow the flames but did not put them out.

Other responding officers saw the suspect driver running from the BMW. The officers caught up and arrested him.

Portland Fire and Rescue and AMR paramedics arrived and initiated firefighting and patient care. The driver and only occupant of the Nissan, a 25-year-old male, went to the hospital by ambulance with serious but non-life-threatening injuries. Likewise for the passenger who was removed from the BMW, a 21-year-old male.

The suspect driver of the BMW was not badly hurt but was also transported to a hospital by ambulance as a precaution. He was discharged and, after an investigation, was booked into the Multnomah County Detention Center. Alejandro R. Velazquez, 19, of Portland, was charged with Assault in the Third Degree (2 counts), Attempt to Elude by Vehicle, Attempt to Elude on Foot, Reckless Endangering (2 counts), Failure to Perform the Duties of a Driver-Injury, Driving Under the Influence of Intoxicants, and Reckless Driving.