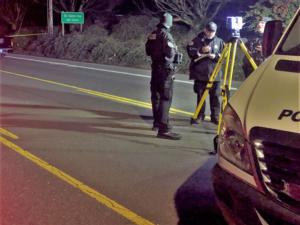 The Medical Examiner has identified the woman killed in this collision as 25 year-old Awbrianna Amaralynn Rollings. Her family has been notified. This is an ongoing investigation.


A pedestrian was struck and killed by a driver who left the scene of the crash in Southeast Portland.

On Saturday, January 22, 2022 at 7:04p.m., East Precinct officers were dispatched to a report of a crash at Southeast 160th Avenue and Southeast Powell Boulevard. When they arrived they found a person deceased in the roadway. Witnesses said the person was struck by a vehicle, then the driver left the scene. Officers were not immediately able to locate the suspect or suspect vehicle.

The Portland Police Major Crash Team responded and is investigating. During the investigation Southeast Powell Boulevard is closed between Southeast 160th Avenue and Southeast 162nd Avenue. If anyone has information about the incident, please contact crimetips@portlandoregon.gov, attention Traffic Investigations Unit, and reference case number 22-20716, or call (503)823-2103.