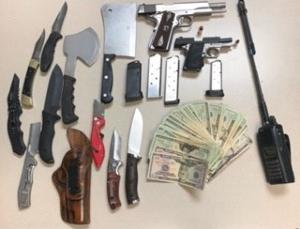 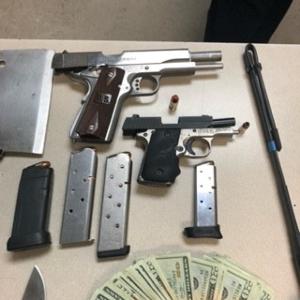 A directed patrol mission let to the arrest of a suspect armed with two guns and 10 cutting instruments.

On the evening of Friday, February 25, 2022, East Precinct Patrol and the Neighborhood Response Team were participating in a crime reduction mission in the Powellhurst-Gilbert Neighborhood Boulevard, where gun violence, vehicle theft, and other crimes have been a significant problem.

At 7:06p.m., officers attempted to stop a stolen vehicle in the area of Southeast Division Street and Southeast 112th Avenue. The driver sped off and eluded the officers. The ground units did not pursue the vehicle, but the Portland Police Air Support Unit monitored it from the sky. The driver continued to drive recklessly despite no police cars following, including speeding and running red lights. Several other drivers were nearly hit by the suspect. An officer was able to deploy a spike strip to deflate the vehicle's tires. The suspect stopped and got into another vehicle near the 7300 block of Southeast 83rd Avenue. Officers stopped that vehicle and arrested the suspect.

The stolen vehicle was returned to its owner.

During the mission, 5 other drivers eluded traffic stops.

Photo description 1: 2 silver semiautomatic handguns, 10 knives and other cutting instruments, cash, and a radio scanner on a table

Photo description 2: close up image of the handguns