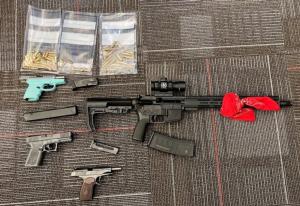 Three males were arrested after a vehicle taken in an earlier carjacking was located and tried to elude police through East Precinct into Gresham.

On Thursday, March 31, 2022 at 2:12p.m., North Precinct officers responded to a report of a carjacking (robbery of vehicle) in the 5000 block of North Cecelia Street. The victim said multiple suspects approached him, one displaying a gun in his waistband, and demanded his car and other property. The victim was not injured. The responding officer put out to precinct personnel a description of the victim's stolen vehicle, a blue Hyundai Sonata.

Officers deferred to the Air Support Unit (ASU), which was flying overhead at the time, to allow further resources to respond. Using the perspective of ASU, they learned the driver was recklessly driving, speeding, running through traffic control devices, and passing vehicles in oncoming lanes, even without any police ground units in pursuit. Another officer was able to successfully deploy spike strips near East Burnside Street and Southeast 148th Avenue. The car continued on at least one deflated tire. Another officer used a Pursuit Intervention Technique to spin the car near East Burnside Street and Southeast 162nd Avenue. The vehicle finally crashed into multiple parked vehicles at Northeast 172nd Avenue and Northeast Glisan Street in Gresham. Four occupants of the vehicle ran, and officers surrounded the neighborhood.

Treveon Phillips, 18, of Gresham, was booked into the Multnomah County Detention Center on charges of Unlawful Possession of Firearms, Attempt to Elude Police by Vehicle, Unauthorized Use of a Vehicle, and an outstanding arrest warrant.

De'Shawn E. Hunt, 18, of Gresham, was booked into the Multnomah County Detention Center on charges of Unlawful Possession of Firearms, Attempt to Elude Police by Vehicle, and Unauthorized Use of a Vehicle.

Juvenile male, 17, of Portland, booked into the Donald E. Long Juvenile Detention Hall on charges of Unlawful Possession of Firearms and an outstanding warrant.

Juvenile male, 15, of Portland, not currently charged, transported to a hospital for treatment of minor injuries suffered during the crash, then released to his parent.

Four guns were recovered from the stolen vehicle, including a loaded AR-15 rifle, and 3 loaded pistols. One was an unmarked, unbranded "ghost" gun (photo). They are now being held as evidence.

More charges are possible after additional investigation is done by Portland Police Robbery Detectives and the Enhanced Community Safety Team.