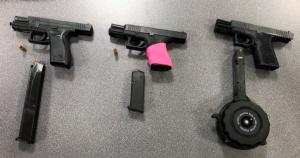 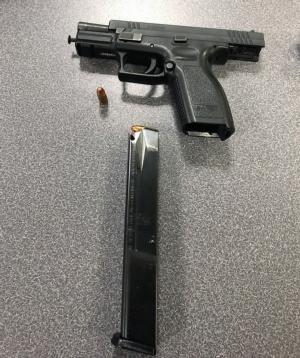 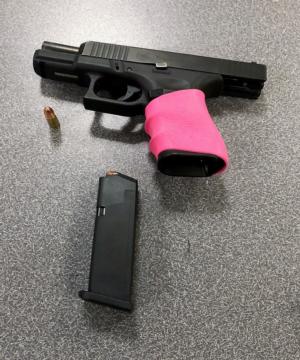 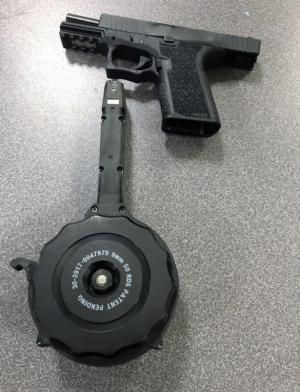 A 23-year-old man and a 17-year-old boy were arrested and three guns were seized after they fled a traffic stop in Southeast Portland.

On Saturday, April 23, 2022 at 1:01a.m., two East Precinct patrol officers initiated a traffic stop on a stolen 2020 Chrysler 300 at Southeast 82nd Avenue and Southeast Holgate Boulevard. The driver eluded officers. They did not pursue, but officers in the Air Support Unit began following the vehicle from their police airplane. Officers were able to use spike strips to deflate the tires, but the driver still did not stop. The driver crashed into a power pole and two fences near Southeast 62nd Avenue and Southeast Knapp Street. Two suspects took off running. The driver, Herman L. Graham, 23, of Gresham, quickly surrendered to officers and was arrested. A 17-year-old suspect was tracked with a K9 officer to a nearby backyard shed and arrested.

Three guns (photos) were recovered from the vehicle and seized as evidence. One had a high capacity drum magazine capable of holding 50 rounds of 9mm ammunition.

The juvenile male, 17, of Portland, was booked into the Donald E. Long Juvenile Detention Center on charges of Unlawful Possession a Loaded Firearm in Public (city code), Unlawful Possession of a Firearm, Theft in the First Degree, Attempt to Elude Police on Foot, and Unlawful Entry into a Motor Vehicle.

Photo descriptions: Three black semiautomatic handguns displayed on a table next to magazines. The middle gun has a pink aftermarket grip. The left gun has a straight extended magazine. The right gun has a drum magazine. Three other photos are close ups of each gun.