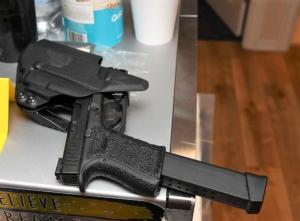 A suspect is in jail on Attempted Murder charges after shooting and critically wounding an Airbnb host in the King Neighborhood.

On Wednesday, May 4, 2022 at 8:38p.m., North Precinct officers were dispatched to a report of a shooting at a house in the 4600 block of Northeast Grand Avenue. They located a shooting victim, an adult female, with an injury to her chest. Paramedics initiated lifesaving efforts and transported the victim to the hospital by ambulance. Despite critical, life threatening injuries, medical staff were able to save her life and she is expected to survive.

Officers learned that the suspect was in a room in the house. After containing the scene and ensuring there was no one else inside, officers began communication with the suspect. After a protracted negotiation, the suspect agreed to surrender and was detained by officers.

Detectives with the Enhanced Community Safety Team (ECST) responded to assume the investigation. They learned that the victim was the property owner and Airbnb host who was attempting to contact the tenant in the short-term rental, Caveion L. Lett, 21, when Lett fired multiple rounds from a 9mm handgun through the door. One of the rounds struck the victim. A gun was seized as evidence (photo).

Lett was booked into the Multnomah County Detention Center on charges of Attempted Murder in the Second Degree, Assault in the First Degree, and Unlawful Use of a Weapon.

Photo description: black handgun with extended magazine, partially out of a plastic holster, rests on a silver appliance