Man Stabbed and Attacked With Hammer During Robbery (Photo) 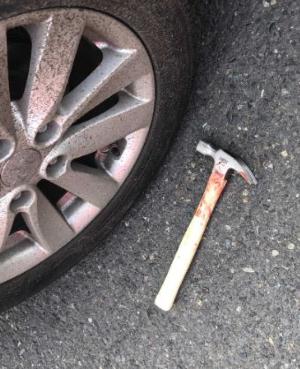 On Saturday, May 7, 2022 at 5:15 p.m., officers from the Central Precinct responded to a stabbing call in the area of Southeast Grand Avenue on the overpass of I-84. Officers arrived on scene and located the male victim who was lying in a pool of blood, suffering from multiple cuts and stab wounds. Paramedics arrived and transported the victim to an area hospital. The victim is expected to make a full recovery.

The suspect, 28 year-old, Luke Joel Andrade, was arrested for Robbery in the First Degree, Assault in the Second Degree, Menacing, Unlawful Use of a Weapon, and Aggravated Assault. Andrade was booked into the Multnomah County Detention Center.

Photo: Hammer with blood on it