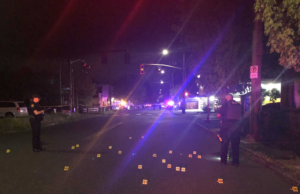 A man has been arrested for shots fired in North Portland, and the stolen vehicle he was driving has been recovered.

On Tuesday, May 24, 2022, at around 2:00a.m., officers at North Precinct began hearing gunfire on the east side of the building. These officers also reported being able to hear the bullets flying past the precinct. Just afterwards, people began calling 911 to report shots being fired on Northeast Killingsworth Street, between Northeast 15th and Northeast 17th. As officers responded, they saw a man jump into a vehicle and drive off at a high-rate of speed. Officers attempted a traffic stop, but the driver refused to pull over. North Officers were able to use a spike strip to puncture the vehicle's tires, and it eventually came to a stop at the intersection of Northeast Grand Avenue and Northeast Broadway. Once the car stopped, the driver exited and ran on foot. Officers were successful in capturing the suspect a few blocks later.

After the suspect, 28-year-old Richard David Simms, was taken into custody, officers located a .45 pistol along his path of travel. Simms had three .45 casings and three live .45 rounds in his pocket. After investigating the vehicle Simms fled from, officers discovered it had been stolen in an armed carjacking on April 22, 2022.

At the scene of the shooting, officers located a total of 60 casings over the two block section of Killingsworth between 15th and 17th, and several buildings were struck by gunfire. Fortunately, it appears nobody was injured as a result of this shooting.