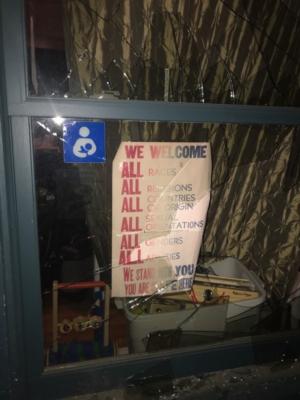 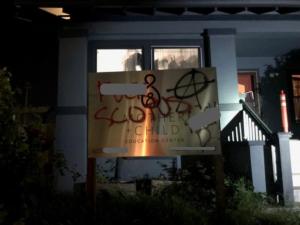 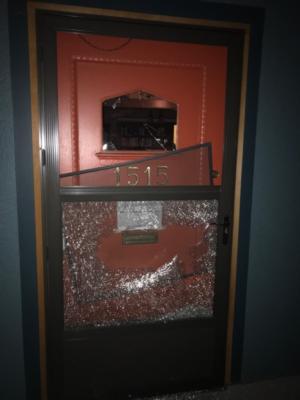 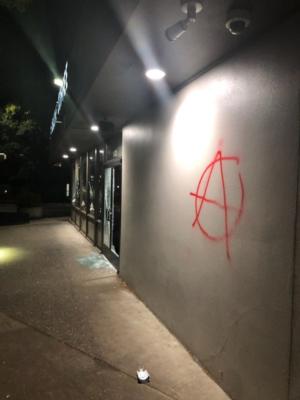 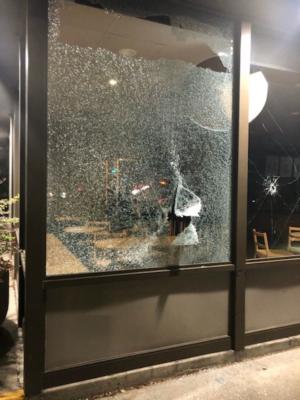 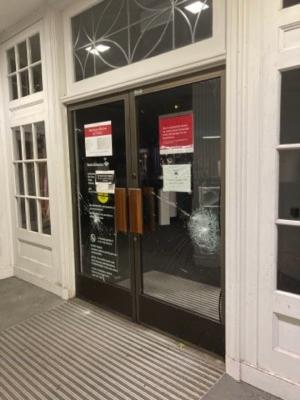 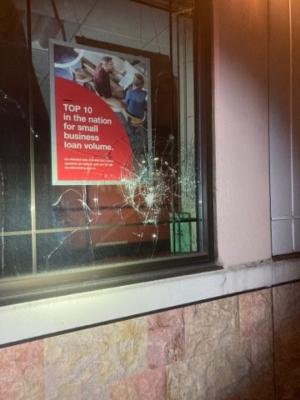 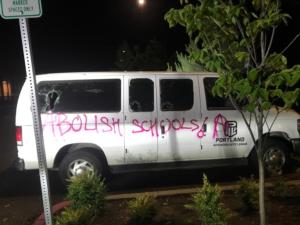 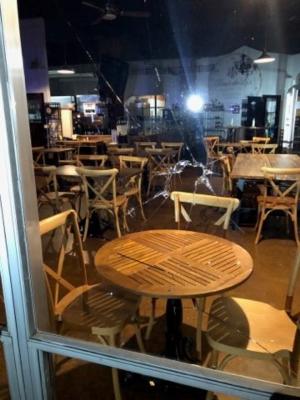 Officers have compiled reports of damage in the Hollywood District Neighborhood. This is the information available to date and may not be comprehensive.

-Parked vehicle, black Tesla, Model 3, shattered front and back windshield, broken out driver side back window, spray painted pink all over the vehicle.

These crimes remain under investigation. If anyone has information about the suspects, or video of the crimes in progress, please e-mail crimetips@portlandoregon.gov and reference case number 22-169901.

A destructive group caused damage to numerous businesses during a march through the Hollywood District.

On Saturday, June 25, 2022 at about 10:00p.m., a group of over 60 people marched out of Grant Park, Northeast 33rd Avenue and U.S. Grant Place. Participants, most dressed in all black, began breaking windows and scrawling graffiti.

Officers were monitoring the crowd, but did not have resources to intervene in the moment. At the time of this event, there was an injury shooting and a stabbing in East Precinct, and a felony assault in Central Precinct. Additionally, a community festival in North Precinct was underway, an impromptu "dance party" drew approximately 1000 people to Irving Park, and they held a march and blocked traffic. There were also calls about speed racers doing stunts in various parts of Portland.

The group left the area by 10:45p.m. Since then officers have been taking reports of the damage. They have confirmed that several banks and coffee shops had broken windows. A van belonging to Portland Public Schools was damaged, broken windows and tagged with paint. A pregnancy resource center was vandalized. Officers are working to contact affected business owners and assist with arrangements to secure the buildings. Efforts are already underway to get graffiti removed.

Individuals who engage in violent activity or property destruction will be investigated and are subject to arrest and prosecution. That does not always happen in the moment. We will continue to conduct follow-up investigations, make arrests, and forward cases to the Multnomah County District Attorney for prosecution. Just because arrests are not made at the scene, when tensions are high, does not mean that people are not being charged with crimes later.

The Portland Police Bureau is asking businesses and community members who have surveillance cameras to review footage to see if they captured any evidence that may assist with the investigations. The bulk of the damage took place between 10:06p.m. and 10:40p.m. If anyone has useful footage, they're asked to e-mail crimetips@portlandoregon.gov and reference case number 22-169901.

If anyone sustained damage and has not been in contact with Portland Police, they're asked to make a police report by calling non-emergency dispatch at 503-823-3333 or online https://www.portlandoregon.gov/police/cor/ . Please reference case number 22-169901.