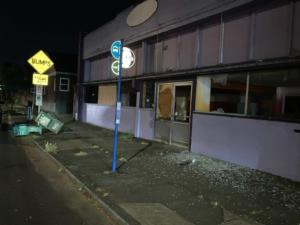 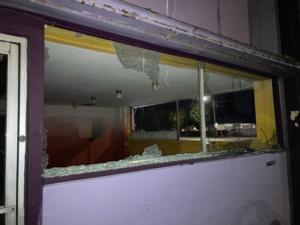 An unlawful assembly was declared after windows were broken in the Piedmont Neighborhood.

On Friday, July 1, 2022, at about 9:00p.m., a group gathered in Peninsula Park. At about 10:30p.m., the group began marching out of the park in the street, blocking traffic on North Rosa Parks Way and on North Albina Avenue. Within a few minutes, officers discovered windows broken at a commercial property in the 6400 block of North Albina Street.

The Portland Police Bureau used a mobile loudspeaker to announce to the crowd that the incident was an unlawful assembly. The announcements were also sent via Twitter. The group began to disperse and left the area a short time later.

Officers documented the damage to the property, which was a vacant former coffee shop. No other damage has been documented. One person who was recording video of the march reported after the event that she was assaulted by a suspect. Those crimes are under investigation. No arrests have been made. If anyone has information about the crimes, please e-mail crimetips@portlandoregon.gov and reference case number 22-175841.

Officers continued to patrol the area until about 11:30p.m.