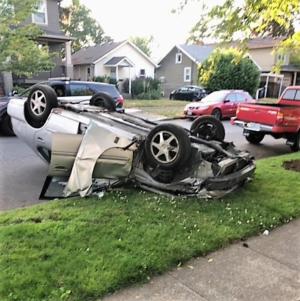 A suspect was arrested for a bias crime against female officers after a car crash incident in which a hostile crowd formed and interfered with police.

On Saturday, July 30, 2022 at 5:46p.m., North Precinct officers were dispatched to an injury accident at North Houghton Street and North Haven Avenue. When they arrived, they found a 1998 Nissan Altima 4-door sedan on its top. Two adult occupants suffered minor injuries. Another adult and a 5-year-old child in the car were not visibly hurt.

One injured occupant, Dominique R. Gonzales, 27, of Portland, began leaving the scene and officers had reasonable suspicion that he had been the driver. Despite being given numerous requests and orders to remain on scene, Gonzales refused. When officers attempted to take him into custody, he physically resisted the officers. Two other occupants of the vehicle, Gregory L. Robinson, 33, of Portland, and Sasha M. Lundy, 35, of Portland, attempted to interfere with officers who were trying to detain Gonzales. They both tried to push past officers to physically intervene in the arrest. The commotion caused several other people to emerge from nearby homes. Several closely surrounded the officers and refused orders to give the officers space to work. The hostile situation prompted a call for "code 3 cover," meaning officers need immediate assistance and additional officers should respond with emergency lights and sirens. As many as 16 officers and sergeants were on scene at once. Paramedics were also on scene and were unable to get them to cooperate with medical treatment. Gonzales and Robinson were arrested.

During the confrontation, officers attempted numerous de-escalation techniques trying to calm the situation. However, Lundy began targeting a female sergeant and a female officer, threatening to assault them because of her perception of their race and gender. The female bureau members attempted to further deescalate by moving away from her while stating they did not want to fight her, but she continued advancing on them in a physically threatening manner. Lundy was arrested.

Upon further investigation, officers learned that Lundy was the driver. She had struck a parked car after turning a corner, causing the Nissan to overturn (photo). Alcohol and speed were factors in the crash.

The Bureau investigates all reports of bias-motivated crimes and encourages any member of our community who is the victim of such a crime to contact law enforcement. Under Oregon law, bias crimes are defined as any criminal act that targets a victim based on the suspect's perception of the victim's race, color, religion, sexual orientation, disability, gender identity or national origin. Detectives work to determine whether or not bias elements are present during the reported crime that align with Oregon law as defined in the Oregon Revised Statutes (ORS):

Photo description: A heavily damaged silver sedan on its top, perpendicular to the curb, its hood over the curbline resting on a bed of green grass.