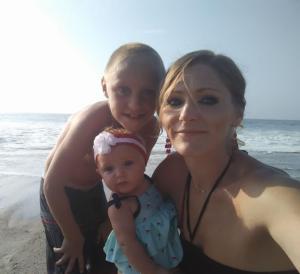 The victim in his stabbing homicide is identified as 38-year-old Stephanie Hack. Hack's family has been notified of her death. Family members requested the public release of this photograph that includes the victim's children. Hack's children were not present at the time of the attack.

Photograph: Stephanie Hack and her children

The suspect in this homicide is identified as 31-year-old Judyann L. Edmond. Edmond was booked into the Multnomah County Detention Center on the charges of Murder in the Second Degree and Unlawful Use of a Weapon.

The identity of the victim will be released after they are positively identified, the Medical Examiner has confirmed cause of death, and after family members have been notified.

On 8/2/22 at approximately 9:05 a.m. a stabbing was reported near the intersection of NW 5th Ave and NW Davis St in the Old Town/ China Town Neighborhood.

Officers from the Central Bike Squad arrived and located a victim with a stab wound. Despite receiving medical care, the victim was later declared deceased at an area hospital.

Officers from Central Precinct responded to secure a crime scene. A suspect was later arrested by bike officers.

Homicide Detectives and Criminalists from the Forensic Evidence Division responded to process the scene. NW Davis St between NW 5th Ave and NW 6th Ave will be closed for several hours as investigators collect evidence.

Additional information will be released when appropriate.