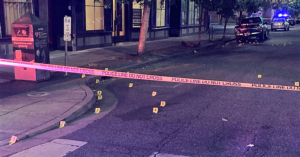 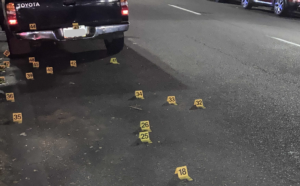 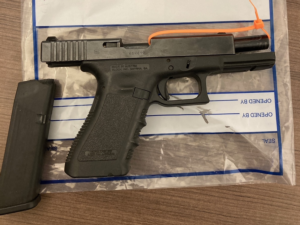 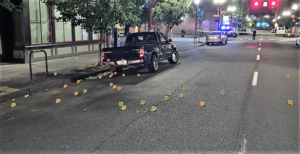 Two men were arrested and 2 guns were seized after a shooting in the Old Town Neighborhood that was captured on video by the Air Support Unit (ASU).

On Friday, August 5, 2022 at 2:01a.m., Central Precinct officers responded to a report of possibly armed individuals in the area of Northwest 4th Avenue and Northwest Davis Street. The ASU responded to assist and, while overhead, captured a shooting in progress on video.

When ground units arrived, they believed that there were possibly injured victims, however they later determined they were just on the ground trying to avoid the gunfire and were not hurt.

Officers, assisted by the Air Support Unit, arrested two suspects nearby. Officers from the Focused Intervention Team (FIT) responded to assist with the investigation. Two guns were seized as evidence, and 88 cartridge casings. One car was towed as evidence. At least 1 building and several cars were damaged by gunfire.

Travis A. Gaters III, 29, was booked into the Multnomah County Detention Center on charges of Felon in Possession of a Firearm, Unlawful Use of a Weapon, Possession of a Loaded Firearm in the City (City Code), Disorderly Conduct, and Reckless Endangering.

Tamarjay D. Polk, 24, was booked into the Multnomah County Detention Center on charges of Felon in Possession of a Firearm, Unlawful Use of a Weapon, Reckless Endangering, Discharging a Firearm in the city (City Code), and Disorderly Conduct.

Additional charges are possible after more investigation is done.

Additional suspects are being sought. No suspect descriptions are being released. FIT and Enhanced Community Safety Team (ECST) investigators are working on the case.

Video from ASU is being released in an effort to aid in the investigation: https://youtu.be/7V7naTu-w68

If anyone has information about this incident, and has not already spoken to police, they are asked to e-mail crimetips@portlandoregon.gov and include case number 22-209718.

ECST investigators consider all gunfire aimed at Portland community members to be attempted murder cases. Eyewitnesses or video evidence is crucial in solving these cases and these crime victims need people to come forward with any information. If anyone has information about a shooting case, please contact crimetips@portlandoregon.gov , or tips can be sent to Crime Stoppers.

Anyone wishing to submit a secure and anonymous tip regarding any unsolved felony crime should visit http://www.crimestoppersoforegon.com or visit the App Store and download P3 Tips for your smart phone or tablet.

Crime Stoppers of Oregon is funded 100 percent by community donations. To support Crime Stoppers with a donation, or to view other unsolved cases, please visit http://www.crimestoppersoforegon.com/

Photo descriptions:
1. yellow evidence placards on the street behind a parked black pickup truck
2. another angle of the yellow placards
3. plastic crime scene tape saying "POLICE LINE DO NOT CROSS" in front of yellow placards
4. black semiautomatic handgun with slide locked back and orange zip-tie through barrel on an evidence bag, an empty magazine nearby.