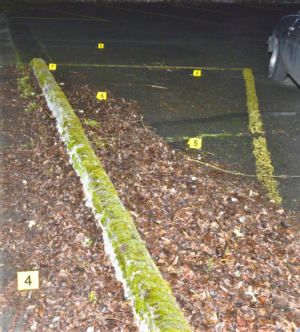 A suspect is facing Attempted Murder charges after his arrest relating to a Montavilla neighborhood shooting in January.

On Monday, January 31, 2022 at 1:14a.m., East Precinct officers responded to a report of a shooting in the 1200 block of Northeast 76th Avenue (photo). When they arrived, they located a shooting victim with serious injuries. He was transported to the hospital by ambulance.

The Enhanced Community Safety Team (ECST) responded to investigate the shooting. Over the course of several months, detectives gathered and processed evidence, and spoke to the victim and witnesses. On Wednesday, August 10, 2022, ECST and the Special Emergency Reaction Team (SERT) served an arrest warrant at a residence in the 400 block of Northeast 76th Avenue. They arrested Peter C. Martin (AKA Peter C. Vey), 43.

The victim, an adult male, has since been released from the hospital and is still recovering from his injuries.

"This is yet another example of diligent and tenacious investigation by ECST," said Chief Chuck Lovell. "East Precinct officers who responded to the scene and the criminalists from the Forensic Evidence Division also played a critical role in this case. I'm grateful for the ongoing great work by SERT, who helped safely take this dangerous suspect into custody. This case represents over 6 months of investigative work. Those who commit gun violence in our community should know that PPB will continue working to build cases and making arrests no matter how long it takes."