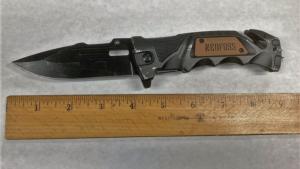 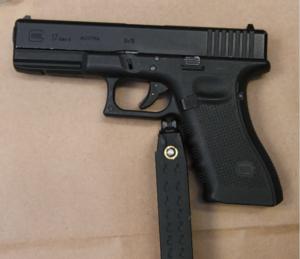 Two 15-year-old suspects were arrested after a robbery and stabbing in the Hazelwood Neighborhood.

On Thursday, December 1, 2022 at 9:08p.m., East Precinct officers responded to a report of a stabbing call in the 12100 block of East Burnside Street. When they arrived, they found a victim with a serious stabbing injury. Officers provided trauma first aid until paramedics arrived and took over patient care. The victim, an adult male, was transported to the hospital for treatment. His injuries are believed to be non-life-threatening.

The officers located another crime victim nearby. The adult female was uninjured, but reported that she had been robbed of her purse by two suspects. The officers learned that the man who had been stabbed witnessed the strong-arm robbery and began following the two suspects demanding that they return the purse. The suspects assaulted the man and he was punched and stabbed. The victim also saw one of the suspects with a gun.

Officers obtained suspect descriptions and broadcast them to officers citywide. The suspects were not immediately located.

At 10:20p.m., North Precinct and Transit Police Department officers responded to a report of a threat with a weapon at a MAX station at 4110 Northeast Halsey Street in the Hollywood Neighborhood. The caller, a Tri-Met security agent, reported that a suspect pointed a gun at him. The agent was uninjured. He provided a description of the suspect and his companion, which matched the description of the earlier Hazelwood Neighborhood robbery/assault suspects.

Officers challenged the two suspects nearby, but they both ran. Numerous officers responded and set up a perimeter, containing the suspects and ultimately allowing officers to find and detain them. A knife and gun (photos) were seized as evidence and further investigation is being done to determine if they are related to the Hazelwood crimes. The gun was determined to be a realistic looking replica of a semiautomatic Glock handgun.

Detectives with the Portland Police Major Crimes Unit responded to investigate. They booked the suspects, both 15-year-old boys, in the Donald E. Long Juvenile Detention facility on charges of Robbery in the First Degree and Assault in the First Degree.