Benchmarks are survey markers that provide a point of particular elevation used as a reference for determining elevations of other points in a survey. They are used by surveyors, engineers, planners, and contractors for establishing elevations for planning, designing, and/or construction of various projects.

The City of Portland is responsible for establishing and maintaining a network of benchmarks throughout the city, each having a known elevation expressed in feet in the City of Portland’s own datum (established in 1896). 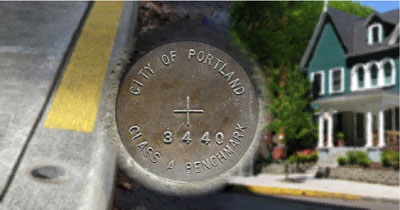 Most of the City of Portland’s Benchmarks are brass disks about 2 ½" in diameter, and all are marked "City of Portland Bench Mark No. nnnn " and usually set in the curbs of streets. Occasionally you’ll see larger disks of 3 ¾" diameter which are "Class A" monuments, and some benchmarks are set in retaining walls, bridge wing walls, culvert headwalls, concrete steps, or wherever the most stable and accessible placement was determined to be for a specific location.

How to convert City of Portland datum to another datum

History of the City of Portland's datum