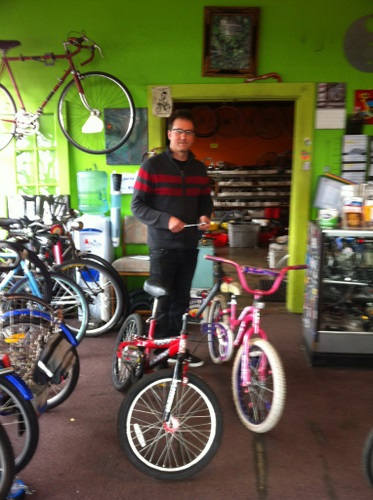 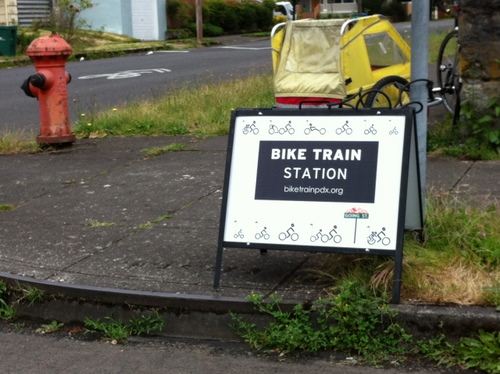 One of our coworker’s came across this awesome Bike Train Sign on N. Going Street. Its great to see the Bike Trains growing and coming up with creative ways to communicate with families.

Public art from the 1970s onward 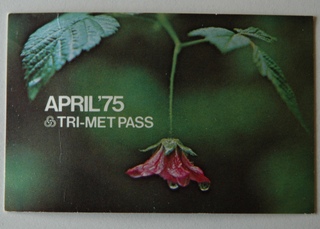 TriMet's How We Roll blog has a nice slide show of the art on its monthly passes.

Click on the image to view the entire slide show.

Speaking of historic TriMet tickets: if you have old, pre-foil TriMet tickets, they are no longer accepted on buses and trains. You can exchange them for new tickets at TriMet's customer service center at Pioneer Courthouse Square.

Would $25 a week keep you from speeding?

In a recent study, drivers managed to speed much less when offered a $25 reward.  The catch? Each time the driver went over the speed limit they lost a little bit of their reward.  It's funny how the human brain does everything possible to avoid punishment, even one as small as six pennies.

The study used GPS devices installed in the participants' cars and gave immediate feedback about the vehicle speed.  So, if the driver crept a few mph over they knew they had just lost a little money.  Enough "beeps" from the GPS unit helped people remain below the limit and keep all their money!

NPR's got the story.

That dull daily drive draining you and your wallet? Explore your commute options. Take the July 2012 Carefree Commuter Challenge

Use any commute option - carpool/vanpool, take transit (bus, streetcar/MAX or WES), bike commute, walk and/or telework - during the month of July and then log your trips at DriveLessConnect.com. Win Fred Meyer gift cards, plus prizes, including a flip camera, portable DVD player or an iPad2 with Wi-Fi.

Get details and register today at DriveLessConnect.com