The dream of the robot-driven car had been around as long as personal jet-pack travel.  Google, of course, has a whole secret division devoted to crazy ideas and their self-driving car looks like it's quickly going from sci-fi to reality TV.

Granted, this story isn't new.  Last week, just about every major media outlet covered Nevada's decision to grant Google permission for their autonomous car to drive itself around the state.  But what are the implication for our transportation infrastructure and our health?

What happens to those parking lots at places like the airport? That's a lot of pavement that could be obsolete in just 10 years (if you're inclined to believe PC Magazine writer John Dvorak's opinion).

And what about our personal health? The motoring public doesn't walk all that much right now, but what happens when we stop walking from the parking lot to the store? What are the cumulative impacts of even less physical activity in our daily lives?

The flip side is a potentially dramatic reduction in automobile crashes and increased transportation system efficiency.  Plus, we'll be allowed to text while we drive again.  Hooray!

Weigh in.  Is this for real?  Or will we still live in a future of honking horns and gridlocked traffic?  Will the Google car provide net benefits for society or cause more problems than it solves?

Even if you don't ride the bus, streetcar, MAX, or WES very often you're still probably familiar with TriMet, the Portland area's main transit provider.  You might even know about Clark County's C-Tran or perhaps you've seen the SAM buses in Sandy when you're heading up to Mt. Hood.

But did you know that between Longview and Salem there are 15 different transit options?  Whether you're heading to Astoria or Yamhill (no "Z" cities in Oregon) there's a bus that will take you there (and your bicycle taboot!).

And now in one beautifully designed map, you can point and click to learn more about each of these options.  Take a look at our new image map of the region's transit options. 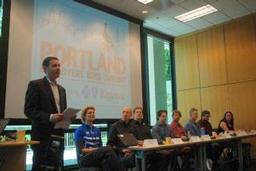 A number of the speakers (Chris King, David Evans, OHSU and Stoel Rives) described their company's financial reimbursement for bike commuters and how it helped the companies remain competitive in recruiting and retaining talented employees.

Portland State Universityhas 30,000 students (and only 2,000 students living on campus) and 4,000 faculty and staff. According to PSU Transportation and Parking Manager Ian Stude, the university provides more than 2,000 bike parking spots (including two four indoor bike garages) and discounted student and faculty transit passes.  From 2000 to 2010, biking by students and staff has more than doubled tripled.

In 2010, 40% of student commute trips to PSU were made by transit and 12% of students, faculty and staff commuted by bike. If those people all chose to drive it would grind downtown traffic to halt, noted Stude.

It was not only big firms who found a way to encourage biking. At Puppet Labs, a technology startup, 80% of employees commute by bike, foot or transit. According to Jill Burrows, the CEO bikes to work, help setting the tone for the company.

Encouragement was a common theme throughout the conference. OHSU's Landolfe turned the Field of Dreams analogy on its head recommending that companies encourage employees to bike and then build excellent facilities to insure that they get used ((“if they come, build it”).

Daimler Trucks North America's demonstrated the power of promotion through an internal company challenge for one bicycle jersey that generated over 11,000 bike commute miles by employees in the chilly and wet month of February.

The Regence Bike Commuter Team envisioned and organized the conference. The Bicycle Transportation Alliance and the Portland Bureau of Transportation provided support.

1) Your commute can alter your genes.
According to Dr. Ruth Loos, a program leader at the Institute of Metabolic Science in Cambridge, England “Physical activity, even in small doses, may subvert genetic destiny. You don’t have to run marathons or work out in the gym. Walking the dog, cycling to work, weeding the garden — those all count” and provide enough moderate to vigorous physical activity to reap benefits.
“Physical activity attenuates the influence of FTO variants on obesity risk: a meta-analysis of 218,166 adults and 19,268 children.” PLoS Med.

*Check out the Case for Cycling wiki for more on why bicycling benefits everyone, not just people who bike.