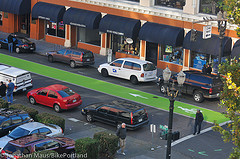 One of Portland’s continuing New Year’s Eve traditions is TriMet’s extended service into the new year.

After 8:00 p.m., trips on TriMet and Portland Streetcar are free of charge.

If you’re looking to stay out extra late on NYE, here are MAX’s last trips for the early hours of 2013: